Republican feud heats up - Cruz vs. Rubio - The Horn News 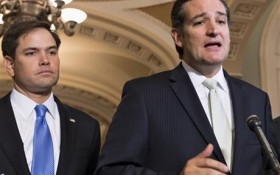 Republican presidential rivals Sens. Marco Rubio and Ted Cruz are working furiously to outmaneuver each other on immigration… and it could be just what former Secretary of State Hillary Clinton wants.

Rubio co-wrote a massive 2013 immigration bill that passed the Senate. He disavows it now, but Cruz won’t stop talking about it.

Cruz opposed the bill, but he offered amendments to massively increase legal immigration. Now he says that’s not a good idea after all, but Rubio won’t let him off the hook.

The war of words between the two GOP candidates pits two of the three strongest head-to-head Clinton v. GOP candidates against one another. According to Quinnipiac poll released on November 4th, among major Republican candidates, only Dr. Ben Carson favors stronger than the two against Clinton nationally.

Rubio beats Clinton in a head-to-head matchup by 2 points. Cruz by 3 points.

But rather than face Clinton, both senators are maneuvering against one another to appeal to conservative GOP presidential primary voters in a campaign overshadowed by Donald Trump, who wants to deport all 11.5 million immigrants in this country illegally.

Some analysts are concerned that Trump’s hard-line stance has pushed the entire GOP field to the right and may create problems for the eventual GOP nominee facing a more diverse general election electorate. Former Florida Gov. Jeb Bush pointed to that possibility in Tuesday night’s GOP debate when he said that Hillary Clinton’s Democratic campaign would be doing high-fives at such talk.

On Thursday Cruz told conservative talk host Laura Ingraham when asked whether he would increase the numbers of legal immigrants to the U.S.: “I don’t believe that’s a good idea.”

Cruz also proposed an amendment to eliminate the path to citizenship in the Senate bill, allowing immigrants in the country illegally to end up with legal status short of citizenship instead.

Rubio highlighted those stances in a campaign appearance in South Carolina on Thursday, saying: “Ted is a supporter of legalizing people that are in this country illegally. … If you look at it, I don’t think our positions are dramatically different.”

Brian Phillips, Cruz’s rapid response director, fired back over Twitter, arguing in a series of tweets that Cruz was not seeking to support legal status for immigrants in the country illegally, only to oppose citizenship. “For the 1000th time, his amdt had nothing to do with legalization. He intentionally focused on citizenship only … to illustrate that Dems weren’t serious about passing real reform.”

Cruz sought to use his appearance on Ingraham’s show to highlight Rubio’s role in authoring the Senate immigration bill with its divisive path to citizenship for many of the immigrants in this country illegally.

When asked about Rubio, Cruz said, “You know where someone is based on their actions, as the Scripture says, you shall know them by their fruits,”

Speaking of Rubio and the other authors of the Senate bill, Cruz also said, “They fought tooth and nail to try to jam this amnesty down the American people’s throat over and over and over again.”

Rubio now says that a single, comprehensive immigration bill is not the way to go and he would not address the status of the people in this country illegally before securing the border and remaking the legal immigration system. Ultimately he would still allow people here illegally to qualify for citizenship, but only after 15 years.