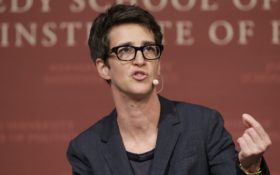 Liberal news host Rachel Maddow is trending on social media — but not for the normal reason. Instead, the MSNBC star wants this epic comeback off the internet.

Maddow made waves when she retweeted that Russia Today was being suggested by YouTube’s algorithm as a way to understand special counsel Robert Mueller’s report on foreign meddling in the 2016 presidential election.

In a brutal comeback, liberal reporter Aaron Mate went off on Maddow.

1/ If YouTube were to recommend your show, it'd be recommending the leading purveyor of now debunked Trump-Russia conspiracy theories, falsehoods & innuendo of the last 2+ years. Here's a sample:

That’s when the floodgates opened —

3/ There was that time in Jan 2017 when you speculated that Putin may use the pee tape & other kompromat to force Trump into withdrawing US troops near Russia. How did that one turn out? pic.twitter.com/XuXXagyCNb

5/ Who could forget that time this past winter when you seized on life-threatening cold temperatures to fear-monger that Russia could kill Americans by knocking out their heat?pic.twitter.com/deo2H4SBBQ

7/ How about that time when you speculated — citing the Steele dossier — that Cohen billed Trump $50k for "tech services" to pay off Russian hackers? It was actually to pay a US firm (https://t.co/GGK6FQLvRJ). pic.twitter.com/TcqdN8mC4z

9/ How about the time when you speculated that Putin installed Rex Tillerson as Secretary of State? pic.twitter.com/YiUYWdxpZ5

11/ Then there was that time when you lamented the suspension of US war games in Korea, and speculated that it was the fault of Putin: pic.twitter.com/cuDgHyDQPs

13/ Based on this sample alone, dare I say that your coverage of Trump-Russia very much amounts to the "deliberate trafficking in unreality":pic.twitter.com/2OXbHhUDHa

15/ How about when you speculated that Maria Butina may have played a role in a secret Russian government plot to funnel money to the NRA in order to influence the 2016 election? How did that one pan out? pic.twitter.com/eaRgZdauty

16/ How about when you said in 3/2017 that "if the American presidency right now is the product of collusion between the Russian intelligence services & an American campaign… we need to start preparing for what the consequences are going to be if it proves to be true." Did it? pic.twitter.com/RO71MGdICd

18/ or when you recently claimed that the hashtag #Kids4Trump
was part of a Russian effort "to destroy American democracy." How much contempt do you have for American democracy to suggest that Russian trolls could "destroy" it? pic.twitter.com/WcuG1RibkB

20/ Speaking of installing Tillerson, remember when you also speculated that Russia was actively getting Trump "to weaken the parts of America that most annoy and that most undermine Vladimir Putin", and so that's why the State Dept. was "hollowed out, disappeared, and muted"? pic.twitter.com/6mX5qCCq5F

Ouch. Completely brutal — especially because it’s Maddow’s own words used against her.

In the face of such heavy criticism by both the left and the right, and under pressure from studio bosses for lagging ratings, it’s only a matter of time until Maddow is finished for good.