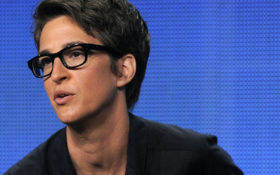 Liberal MSNBC host Rachel Maddow is known for bending the truth. But Wednesday, she took it to the next level — and lied straight to the face of every one of her viewers.

During the Wednesday night broadcast she supplied viewers with false information on the tax bill package… and she’s being called out for it.

Maddow claimed, without proof, that taxes are going up to give major corporations an “embarrassing amount of money,” and individual Americans’ taxes will be going up.

It sounds as though Maddow never bothered to read over the tax bill — and her claims are embarrasingly wrong. Approximately 80% of Americans are actually expected to see their taxes go down, not go up.

And no one is being “given” money. Instead, less money is being taken by the government.

Additionally, following the passing up the tax bill, several major corporations offered huge bonuses to their employees. Wells Fargo, Comcast and AT&T all offered to give Christmas bonuses to their lowest paid employees and to also raise minimum wages.

Instead of looking at that as an exciting factor of this new bill, Maddow claimed that this was shining proof of negative impacts that will result from it?

Critics are very confused. Why is it a bad thing that these corporations are awarding their employees with extra cash?

It’s not — unless, of course, you’re trapped in Democratic doublethink, where money is bad unless it is given as government handouts.

Even funnier is that MSNBC is owned by Comcast, so Maddow will likely benefit big time.

“So when your families’ taxes go up because of this bill, you can take comfort in knowing that’s what you’re paying for, you’re giving telecom companies and biggest banks in the country a really embarrassing amount of money to have to explain away.”

She has her liberal blinders on, unable to see the lies she has been caught up in.

Less than 5% of Americans are projected to see an increase in taxes, and that increase is only expected to be a whopping $10 extra per year.

Here’s a tip for this snowflake: Do your research before embarrassing yourself on air.