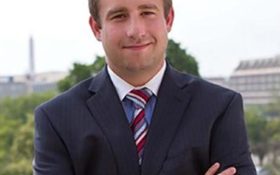 Jack Burkman, a Washington-based attorney and a leading independent investigator of the Clinton family, has been on the hunt to solve the 2016 murder of former DNC staffer Seth Rich — and he revealed this week that he has a credible eyewitness that can identify the two men responsible.

Rich was murdered on July 10, 2016 near his apartment in Washington, D.C. He was shot in the back twice with a handgun, but his wallet, credits, watch, and phone were all left in possession. The local police department described his murder as a tragic “botched robbery,” but other conspiracy theories link the murder to Hillary Clinton’s failed presidential campaign.

Despite himself being shot in an ambush linked to the Rich investigation, Burkman has not given up — and his determination seems to have paid off. In an interview with The Gateway Pundit on Sunday, Burkman suggested that his alleged eyewitness has enough evidence to bring the killers to justice at the end of the month.

Since Rich was murdered, rumors have circulated that he was working as a WikiLeaks informant prior to his death. These same rumors have linked Rich to the bombshell email leak that rocked the Democratic National Committee just two weeks before his untimely death. Conspiracy theorists have suggested the murder was a retaliation.

The persistent rumor is something Rich’s family has strongly denied. They have accepted official reports and asked for privacy — but that hasn’t deterred Burkman and his team of investigators.

Burkman explained to The Gateway Pundit on Sunday, “We believe that we have reached the beginning of the end of the Seth Rich murder investigation.”

Conservative media site WND reported that one witness “fears for his life” and will be accompanied by armed guards and have his identity disguised ahead of his testimony. The witness reportedly made an appearance at a press conference held by Burkman on Tuesday via phone call. Burkman tweeted out an invite to all press on Sunday afternoon.

All press should attend my press conference TUESDAY at 1:00PM at the HOLIDAY INN Rosslyn Key Bridge. We will present a witness who brings us close to resolution in the Seth Rich case. #SethRich

According to The Gateway Pundit, Frank Whalen, a retired New York Police Department Detective Sergeant, found the witness for Burkman.

“We found him through working with a retired New York City detective, who found him and brought him to us. We have thoroughly vetted this witness and we believe in this witness,” Burkman said.

“He has evidence that substantiates his claims but it will be revealed slowly. This witness is in great fear of his life — that’s why we are going with disguising him, disguising his voice and everything about him,” Burkman added in the press conference.

The witness’ testimony allegedly aligns with video surveillance footage from the night of Rich’s death.

“What the witness says matches what the police say and matches what we know from the surveillance videos,” Burkman has said. “The police let me see the video. The police said the video clearly identifies the pant legs of two men. So, there were two men involved in the killing that night. I now believe that in the next 3 to 4 weeks the entire matter will be resolved. It’s the beginning of the end.”

Despite being the victim of two attacks while investigating the Rich death, one nearly fatal, Burkman says he does not live in fear and neither should his witness.

“I now have armed guards all the time. And we will have even more armed guards at the press conference the place will be surrounded with private armed security,” he said. “But once we start living in fear we might as well have Adolph Hitler in power. Once you live in fear, there’s no reason to have won World War II.”

Following the press conference, a candlelight vigil was held in honor of Rich.

“I promised the Rich family that I would find their son’s murderer. Their son was a great patriot and a great young man, and it is for that reason that I want to solve this murder,” Burkman told The Gateway Pundit.

“His heart was in the right place and I want to honor him. We are one big political fraternity. This could have happened to any of the young people who work for me, Republican or Democrat, I employ both. This could happen to anyone of those young people.”

Burkman isn’t the only one independently investigating Rich’s murder.

Researchers at The Profiling Project, an independent forensic-psychology group based out of Arlington, Virginia, concluded last month that Rich wasn’t the victim of a botched robbery.

According to Newsweek, their June report stated that Rich’s death “does not appear to be a random homicide” or “a robbery gone bad” as local police concluded. Instead, his “death was more likely committed by a hired killer or serial murderer.”

“The person folks [should be] looking for and considering isn’t a robber who kills, but really is a killer, and maybe a killer that doesn’t rob,” Kevin Doherty, a George Washington University graduate and one of the volunteers with the Profiling Project, told Newsweek. “The fact that this person has gotten away with it shows a level of proficiency.”

Over $250,000 in reward money is being offered for information the leads to the arrest of Rich’s killers.