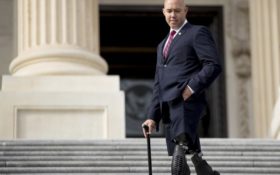 President Donald Trump is considering an Army veteran who is a Republican member of Congress for the position of Veterans Affairs secretary, part of a lengthening search for a nominee following the abrupt firing of David Shulkin in March.

A White House official on Thursday said Rep. Brian Mast of Florida, who was elected to the House in 2016, was among the list of candidates for the job heading an agency of 360,000 employees serving 9 million veterans.

The White House official would not say if Mast is the leading candidate for the VA position. The official spoke on condition of anonymity to discuss internal deliberations.

Mast is the first member of Congress to open a lawmaker satellite office in a VA facility, setting up shop in the West Palm Beach VA to meet with veterans. He was wounded when serving in Afghanistan in 2010, which resulted in the amputation of both of his legs.

Mast, 37, has often voted along with Trump on key issues in Congress, more recently announcing he supported an assault-weapons ban following the mass shooting at a high school in Parkland, Florida.

Trump is seeking a nominee to lead the VA after White House physician Dr. Ronny Jackson withdrew his nomination for the post last month.

White House officials have met with former Florida Rep. Jeff Miller, a Republican who once led the House Veterans’ Affairs Committee and Ron Nichol, a senior adviser to The Boston Consulting Group, who helped organize the president’s transition.

Acting VA Secretary Robert Wilkie, a former Pentagon undersecretary for personnel and readiness, and Samuel Spagnolo, the president of the National Association of Veterans Affairs Physicians and Dentists, are also under consideration for the post.

VA officials have told some veterans groups they are preparing for the possibility that the agency won’t have a permanent VA secretary in place for another three months, as Trump mulls over replacement candidates. The VA faces problems demanding immediate attention, including a multi-billion dollar revamp of electronic medical records now in limbo that members of Congress fear will prove too costly and wasteful, and a budget shortfall in the coming weeks in its private-sector Veterans Choice program. The House is slated to vote on a wide-ranging bill next week that would give veterans more freedom to see doctors outside the VA health system and fill the budget shortfall, a major step toward fulfilling Trump’s promise to expand private care for veterans.

Trump originally chose Jackson, a career military doctor who lacked significant management experience, to replace Shulkin, a decision that surprised veterans groups who had not been previously told that his name was under consideration. While Jackson was well-liked in Washington and drew praise from Obama administration officials he’d treated, even many Republicans were skeptical of his ability to lead the VA.