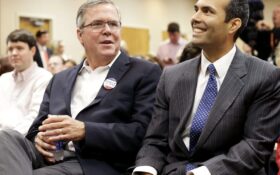 Reports are surfacing that former President Donald Trump is prepared to endorse a key member of the Bush dynasty in their latest political run.

But it’s not his former rival in ex-Florida Gov. and 2016 presidential candidate Jeb Bush. And it is not former President George W. Bush.

The younger Bush is running for the Attorney General seat in Texas and is considered the top challenger to incumbent and Trump ally Ken Paxton.

The former president said he will soon be making an announcement on who he’s throwing his support behind.

“I like them both very much,” Trump said Tuesday. “I’ll be making my endorsement and recommendation to the great people of Texas in the not-so-distant future.”

Critics argue that Trump could be considering Bush because, unlike the rest of his political family, he’s actually quite the supporter of Trump.

Monday, Bush took to social media to reveal his ties with the former president.

“Great to speak with President Trump to discuss the future of Texas and how we are keeping up the fight to put America first,”  he wrote. “I appreciate the words of encouragement and support. Big things coming soon!”

Great to speak with President Trump to discuss the future of Texas and how we are keeping up the fight to put America first. I appreciate the words of encouragement and support. Big things coming soon! pic.twitter.com/U5cYFAFlCk

Paxton has remained silent on a potential endorsement.

The upcoming primary presents a different situation for Trump than normal. Often throughout his political career, he has had the easy choice between a “MAGA” supporter and a “Never Trumper” — leading to a clear-cut endorsement.

In this situation, both candidates are outspoken supporters of the 45th president.

According to Hot Air, Paxton was one of the few Republicans in Trump’s corner during the election fight, who even showed up in Washington, D.C. on Jan. 6.

Bush, on the other hand, won Trump over by flying in the face of the Bush family and embracing Trump’s presidential run.

A thin margin separates the two candidates, but insider have suggested that a lingering indictment on Paxton could spell trouble and ultimately be the deciding factor in comparison to Bush, who could be a fresh face free of scandal in the attorney general seat.