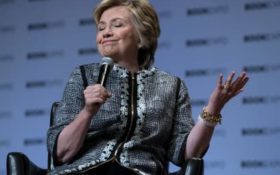 There’s new evidence that the FBI’s investigation into President Donald Trump contained more problems than ever previously reported. What’s worse, the American taxpayer had to foot the bill.

The source of the most explosive allegations against Trump in the Steele Dossier was on the government’s payroll, according to explosive new revelations that came out this week.

It was already known that the FBI relied on the bogus Steele Dossier to obtain FISA court warrants to spy on Carter Page and, through him, on the Trump campaign. And it was known this was the product of a long chain of payments laundered through multiple sources that stretched back to the Democratic National Committee and Hillary Clinton’s campaign.

Remember the claims that Trump hired Russian prostitutes to urinate on a hotel bed when he found out that Barack Obama had slept there? That was Danchenko’s work.

It turns out you paid Danchenko, too.

The FBI listed the Russian-born myth-maker as a “confidential human source.”

The findings came out in legal filings from Special Prosecutor John Durham, were unsealed on Tuesday.

That makes Danchenko the second foreigner on the FBI’s payroll during the years-long quest to turn President Trump out of office. Former British spy Christopher Steele also received payments from the U.S. government—which means from you, the taxpayer—during the same time period.

Even though the FBI knew early on that the two pulled most of the report out of their imagination, they brought the two onto the federal government’s payroll…and let the allegations trigger a two-year-long investigation.

Durham has charged Danchenko with five counts of lying to the government.

Danchenko claimed that he got his information by interviewing secret, well-placed sources in Russia—but much of the material actually came from a former Clinton campaign official named Charles Dolan Jr., who is called “PR Exec 1” in Durham’s indictments.

Why pay Danchenko? Possibly to buy his silence. The FBI knew its investigation had collapsed—and the “Russian collusion” narrative was a lot of hot air—years before it made the information public.

One of the people who could have told the public was Danchenko. But the Technofog substack pointed out one possible angle on the Deep State’s actions: If Danchenko was an FBI “source,” they could tell him not to speak to the media; then they could turn around and tell reporters that they couldn’t answer questions about their investigation, because it involved a current, confidential source.

“The disclosure rocked Washington and raised additional questions of the FBI’s eagerness to pursue any allegations against Donald Trump despite being warned that the dossier appeared to be a vehicle for Russian disinformation,” wrote Jonathan Turley—a legal expert who is far from a fan of the 45th president.

The disclosure rocked Washington and raised additional questions of the FBI’s eagerness to pursue any allegations against Donald Trump despite being warned that the dossier appeared to be a vehicle for Russian disinformation…https://t.co/Q5YEeOZ3ye

Despite the scandal, Durham’s probe seems to be dying with a whimper.

Durham has dribbled evidence before the grand jury for more than a year—but so far, he’s had little to show for it.

Durham’s final report was supposed to be finished by May—but now Durham says he won’t finish the it until after the 2022 midterm elections.

“The public is waiting ‘with bated breath’ for the Durham Report, which should reveal corruption at a level never seen before in our country,” wrote Trump, obviously frustrated at the glacial pace of Durham’s progress.

Now, it looks like he’s riding off into the sunset.

“Durham appears to be winding down his three-year inquiry without anything close to the results Trump was seeking,” The New York Times bragged this week. “The grand jury that Durham has recently used to hear evidence has expired, and while he could convene another, there are currently no plans to do so, three people familiar with the matter said.”

Even when Durham types up the final words of the account we, the public, may never see it.

The decision to let the American people read his findings rests with Attorney General Merrick Garland, who has proved to be as biased an appointee as anyone in the hyper-partisan Biden White House.

The Durham probe looked to be heating up last November, when he indicted Danchenko shortly after charging Clinton attorney Michael Sussmann with lying to the FBI.

But Sussmann, who texted a close friend at the FBI that he wasn’t representing the campaign when he planted Danchenko’s dirty allegations, wriggled out of the charges in June. His lawyers said their client’s acquittal sent “an unmistakable message to anyone who cares to listen.”

They claimed it showed that Durham’s charges were “overreach”—but you could think it also says the Deep State protects its own… and it forces you to pick up the bill.