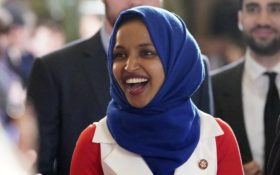 Evidence continues to confirm allegations that Rep. Ilhan Omar, D-Minn. — one of the four “squad” Democrats led by Rep. Alexandria Ocasio-Cortez, D-N.Y — illegally spent hundreds of thousands of dollars paying for the personal travel of her current husband.

Even while the two were married to other people.

Campaign records show that Omar steered almost a million dollars to a political consulting group owned by Tim Mynett, the man she married this year.

But a federal complaint says that money actually went to personal expenses so the two could carry on their extramarital affair — and continued after they tied the knot.

Federal Election Commission documents show that during the first three months of 2020, Omar’s campaign paid out  $292,905 to the E Street Group, a firm owned by Mynett.

That’s 40 percent of every dime her campaign has spent this year.

That’s on top of $525,000 that went from Omar’s campaign coffers to Mynett’s organization last year.

Not only did Omar pay her lover, and now husband, more than $800,000, but the donations increased as their personal relationship deepened.

During that time, Mynett confessed his illicit relationship with Omar to his then-wife, Beth, and introduced the up-and-coming Democratic House freshman to his children, court documents state.

Then the cash count really started to pour in.

Omar announced she and Mynett got married in March—and since then her checks to the E Street Group have risen to almost $300,000.

Omar’s spike in campaign spending during this time has conservative analysts shaking their heads.

In 2018, “almost all that money was spent after the primary and in a general election race,” where the Democrats have a 36-point lead, according to RedState.com. “In other words, the ‘consulting’ costs simply don’t add up.”

The growing campaign expenses include tens of thousands of dollars marked “travel expenses”—including $9,392 in travel this quarter alone.

Omar doesn’t break down what—or who—is using the travel funds. But it’s clear that much of the spending is making sure that Mynett can travel with Omar.

That makes ethical organization believe that Omar broke—and is still breaking—the law by forcing her donors foot the bill for her paramour.

“Although Mynett’s formal relationship with Rep. Omar’s campaign began in July 2018, with the payment of $7,000 directly to Mynett, the reimbursements for Mynett’s travel did not commence until April 2019, the same month that (Mynett’s wife) alleges in her (divorce) filing that her husband told her of the affair, and made a ‘shocking declaration of love’ for Rep. Omar,” according to an FEC complaint filed by The National Legal and Policy Center, a national watchdog nonprofit organization.

That casts a shadow over the socialist Minnesota congresswoman’s financial, as well as personal, integrity.

“Mynett’s travel as reported by Ilhan for Congress may have been unrelated, or only partially related, to Omar’s campaign,” the federal document says.

“If Ilhan for Congress reimbursed Mynett’s LLC for travel so that Rep. Omar would have the benefit of Mynett’s romantic companionship, the expenditure must be considered personal in nature,” NLPC said.

Campaign finance law makes it illegal for a politician to use campaign funds for personal travel, for herself or anyone else, unless the recipient pays the money back.

There’s no record of Mynett reimbursing the campaign over the travel.

Getting married gives Omar an additional legal weapon: A husband can’t be compelled to testify against his wife in a court of law.

“Omar’s marriage to Mynett, while hundreds of thousands of dollars are flowing to his firm, reinforces the allegations in our FEC Complaint that campaign funds have been illegally used for personal purposes,” said NLPC Chairman Peter Flaherty.