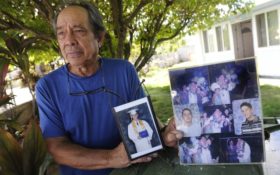 A Hawaii-based Army soldier accused of attempting to support the Islamic State group will plead guilty, his lawyers told The Associated Press on Tuesday.

Birney Bervar, one of Sgt. 1st Class Ikaika Kang’s attorneys, told the AP that Kang will plead guilty as charged in the indictment, which accuses him of providing material aid to terrorists. Kang is agreeing to a 25-year sentence for charges that could have put him in prison for life, Bervar said.

Kang is scheduled to withdraw his not guilty plea Thursday, court records show. The hearing was moved from the afternoon to the morning because of concerns about a hurricane headed for Hawaii, Silvert said.

A plea agreement hasn’t been filed in court yet.

A confidential informant told authorities Kang watched videos depicting beheadings and other violence in his room for hours every day, according to court documents.

Kang told the informant that if he became an Islamic State member, he would be a suicide bomber and attack Schofield Barracks, a sprawling Army base outside Honolulu, according to an affidavit filed in court.

Kang began researching the Muslim religion in 2014, couldn’t wait to move to the Middle East to “join the cause” and was “only in the military for a paycheck,” the informant said, according to the affidavit.

When Kang met with the undercover agents at a home in Honolulu, he pledged allegiance to the group and kissed an Islamic State flag, according to court documents.

Kang may suffer from service-related mental health issues that the government was aware of but neglected to treat, Bervar has said previously.

Kang has been detained without bail since his arrest last year. Kang is still in the Army, but his duty status is “confined,” said Lt. Col. Curt Kellogg, with the 25th Infantry Division.