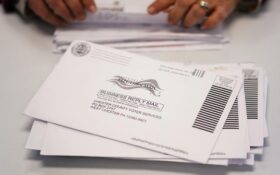 If you think the Democratic Party is becoming a socialist party, a new survey shows it’s not your imagination: You’re right.

Not only have self-described socialists unleashed a concerted plan to burrow their way into the Democratic Party and radicalize it from the inside—but they’ve also been remarkably successful in the last three elections.

More than 90 percent of socialists who ran for office in the 2022 midterms won their race, according to a new tally from a Midwestern think tank called the Heartland Institute Midwestern.

That means the Democrats ran up “a win percentage of 91 percent for socialist candidates,”  according to a comprehensive report from the  Heartland Institute’s Socialism Research Center.

The institute focused on candidates endorsed by any of three openly socialist — or “progressive” — organizations: Our Revolution, founded by Senator Bernie Sanders, I-Vt.; the Democratic Socialists of America, which already boasts members like Alexandria Ocasio-Cortez of New York; and the Progressive Democrats of America, which backs socialized medicine and amnesty for millions of illegal immigrants pouring over our open border.

The conclusion? Not only did socialists win; they won big.

“The average margin of victory for socialist candidates was more than 30 percentage points over the second-place finisher, even after excluding uncontested races,” wrote study authors Justin Haskins, Chris Talgo, and Jack McPherrin.

That means socialists are getting more popular. “The average margin of victory (of socialist candidates) increased by more than five percentage points [relative to the 2020 election],” the report said.

They also swept over the whole country. Everyone knows of socialist wins by such members of “The Squad” as Reps. Ocasio-Cortez, Ilhan Omar of Minnesota and Rashida Tlaib of Michigan. They come from safe, blue districts.

But the Heartland team reported “Socialist Cruises to Victory in Texas” earlier this year.

Greg Casar of Austin won his primary—then crushed his Republican challenger three to one: 72 percent to 27 percent.

“Casar will be among the most progressive members of Congress ever to serve from Texas,” according to the far-Left Texas Tribune. That sounds modest—until you remember President Lyndon Johnson, whose Great Society expanded government more than any program in U.S. history, served from the Lone Star State.

Even in places where far-Left candidates won, Republicans can hardly breathe easy. For example, the report doesn’t list far-Left Democrat Mandela Barnes, despite his endorsement from Progressive Democrats of America. Barnes ran for U.S. Senate in Wisconsin—and barely lost a razor-thin race to conservative Republican Ron Johnson. The incumbent beat back Barnes by one percent—or 27,000 votes.

That’s an outlier from the socialists’ real plan to turn America into a Marxist country: They don’t bother with races where they have to compete. Instead, they take over the Democratic Party from the inside and turn it into a socialist party.

A look at the far Left’s 2022 election strategy “clearly indicates that socialists continue to reap great rewards at the ballot box, and that socialist organizations are pragmatically targeting Democratic bastions to replace ‘establishment’ Democrats with radical socialists,” the report stated.

So, first they create as many Democratic districts as possible. Then they run the most left-wing socialists they can in those districts.

Before you know it, America has been transformed into a socialist country without any debate — or input — from Red State America.

“Overall, the continued success of radical leftist politicians and the replacement of more moderate centrist Democrats is a cause for alarm and should serve as a wake-up call to both conservatives and the more moderate wing of the Democratic Party,” the authors noted.

Everyone who cares about liberty, freedom, or their own lives should be worried about the growth of socialism in the United States. People live an average of 15 years longer in economically free countries than in socialist countries, according to one survey by the Fraser Institute. They measured 79.5 years in capitalist nations vs. 64.4 years in socialist regimes.

The Democrats have a plan to turn America into a socialist nation. Every American needs to fight socialist Democrats with every political tool we have. Vote in every election. Take other conservatives to the polls. Teach young people the message of constitutional liberty. Share articles like this one from The Horn to help us spread the message. Fight socialism with every bit of strength you have.

Your life depends on it.