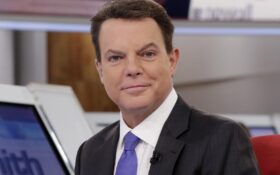 Broadcaster Shepard “Shep” Smith worked at Fox News Channel from its inception in 1996 until 2019, quitting after a run-in with Fox’s ascendant opinion host, Tucker Carlson.

After leaving FNC, Smith started The News with Shepard Smith on CNBC.

Now Smith’s show has been canceled… and Smith himself is headed for an uncertain future.

According to Nielsen ratings, Smith has averaged 222,000 viewers this year, down slightly from 2021.

MSNBC’s Joy Reid has become notorious for dragging MSNBC’s ratings into the ground. Yet, even Reid attracted 1.3 million viewers that day, according to Nielsen.

Smith was lured to CNBC by previous chief executive Mark Hoffman. But Hoffman was replaced in September by KC Sullivan, who announced Smith’s exit in a memo to staff on Thursday.

“I believe we must prioritize and focus on our core strengths of business news and personal finance,” Sullivan wrote.

Sullivan has planned for a business news show to launch next year in the same timeslot… but Smith won’t be the host.

Whether voluntarily or not, Smith is leaving the network instead of pivoting to business news.

Even after canceling Smith’s show, Sullivan has spoken highly of him. The CNBC executive said, “At a time when misinformation and disinformation is rampant, ‘The News’ succeeded in providing audiences with the clearest understanding of the facts.”

Smith will make his last CNBC broadcast sometime later this month. He broadcasts every weeknight at 7 p.m., just as he did at Fox News Channel before being moved to the afternoon.

“I stuck with it for as long as I could,” Smith has said of his time at Fox News.

“I know that there are a lot of people who have propagated the lies and have pushed them forward over and over again who are smart enough and educated enough to know better… I don’t know how some people sleep at night.

As of Thursday, Smith has yet to publicly comment on CNBC’s announcement.

Viewers speculated about Smith’s next move. “Sheppie is running out of networks,” one Twitter user said. “He’ll fit right in at CNN.”