Report: Obama wants to intervene in 2020 race - The Horn News 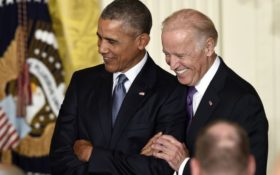 Former President Barack Obama could soon inject himself into the 2020 race.

But it’s not on behalf of his former Vice President, Joe Biden — who is struggling to lock up the presidential nomination.

Instead, Obama is eyeing intervening in the Democratic primary by speaking out against Sen. Bernie Sanders, I-V.T. According to Fox Business, insiders close to Obama say that he’s anxious about the progressive candidate’s growing popularity.

Obama doesn’t like the direction Sanders wants to turn the Democratic Party. And those close to the former president say that he doesn’t think Sanders is fit to be president… nor does he even think that Sanders would beat President Donald Trump.

The rumors, if true, are significant.

There’s a slight chance that this could simply be a “hidden” Biden endorsement in plain sight.

But it’s the growing threat from the far-left and socialism allegedly scares Obama to the breaking point.

It’s no secret that Sanders is surging among Democratic voters: He’s widening his lead in New Hampshire, new polls show.

This increase in popularity within the Democratic Party suggests that it may not even matter what Obama has to say.

Democratic centrism has been declared dead and boring.

Far-left progressive voters, led by the likes of Sanders and Rep. Alexandria Ocasio-Cortez, D-N.Y. have already hijacked the party — and it could cost them in the 2020 election.

Socialism may be all the rage among liberal voters, but nationally it’s anything but — giving Trump a huge advantage if he were to face Sanders in November.

As poor as his presidency was, Obama is right to be concerned.

In response to Trump’s first-term, the socialist faction is selling its voters the idea of a “no compromise” administration; that means open border policy and “social justice reform” — the far-left way and the far-left way only.

Remember when Democrats pretended there was no border crisis to sell the idea of no borders?

If Democrats thought that Trump’s election was a backlash to eight years of Obama — imagine the response if socialists end up sharing the White House.

Obama knows this — and he’s ready to step in.