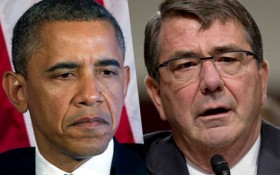 Another email scandal has rocked President Barack Obama’s administration — and this one may have put our national security at risk.

The Pentagon acknowledged Wednesday that Defense Secretary Ash Carter used a potentially unsecured personal email account for government business during his first months on the job.

Carter’s press secretary, Peter Cook, released a statement saying Carter admitted the use of personal email for work-related business, and said the practice was a mistake.

The Pentagon statement was in response to a report published late Wednesday by The New York Times. The newspaper reported it had obtained 72 work-related emails that Carter sent or received from his personal email account.

Hillary Clinton came under heavy criticism when it was revealed in March that she had used a personal email account as secretary of state.

Carter took office in February, and according to the report continued to use his personal email account for work purposes for two months after the Clinton scandal broke.

The Times said the emails it received under the Freedom of Information Act were primarily exchanges between Carter and Eric Fanning, who was his chief of staff at the time and is now the acting secretary of the Army.

The emails were on work-related topics, the Times said, including some references to classified material disposed of in so-called “burn bags.”

The revelation is almost certain to prompt a Congressional inquiry, and GOP members of Congress have long demanded that Obama set and enforce tighter guidelines with regard to how his top advisers use email.