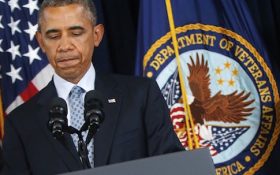 A new report from the Department of Veterans Affairs Inspector General office proves Obama’s administration still has not improved the veterans care system — despite Obama’s years of promises. It seems Obama is more interested in running out the clock on his second term than actually living up to his promises to our veterans.

Veterans still are dying while awaiting care at the Phoenix VA Health Care System, according to the Inspector General’s report released Tuesday.

The Phoenix system was at the center of a national scandal in 2014 when Veterans Affairs internal investigations identified 35 veterans who died while awaiting care. Veterans on secret waiting lists reportedly faced scheduling delays of up to a year.

“More than two years after the Phoenix VA Health Care System became ground zero for VA’s wait-time scandal, many of its original problems remain, and this report is proof of that sad fact,” U.S. House Veterans Affairs Committee Chairman Jeff Miller said in a statement. “It’s clear veterans are still dying while waiting for care, that delays may have contributed to the recent death of at least one veteran and the work environment in Phoenix is marred by confusion and dysfunction.”

Miller didn’t release any other information about veterans who died. Phoenix VA officials didn’t immediately return a call seeking comment on the report.

The Phoenix system enrolls about 85,000 veterans and announced last week the hiring of yet another new director since the 2014 firing of Sharon Helman.

“VA’s performance in Phoenix and across the nation will never improve until there are consequences up and down the chain of command for these and other persistent failures,” Miller said. “Unfortunately, given that this report is largely devoid of clear lines of accountability to those responsible for Phoenix VAHCS’s current problems, it is unlikely these issues will be solved anytime soon.”

“Today, we have even more reason for outrage over the poor leadership, understaffing and lack of communication and coordination at the Phoenix VA,” said U.S. Rep. Ann Kirkpatrick, D-Ariz.

Arizona Sens. John McCain and Jeff Flake said in a joint statement that “despite nationwide outrage following the scandal, today’s report confirms that cultural change at the Phoenix VA is still desperately needed.”

Do you think President Obama will fix the VA? Or is he waiting out the clock on his term? Comment below.