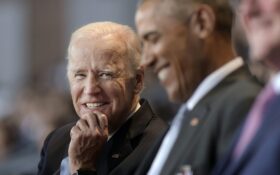 A new book reveals that Obama hates being the figure behind Joe Biden’s only successful presidential campaign, because he never liked Joe Biden. It also reveals that Biden has always been a figurehead intended to parrot lines that were written for him by others whose hands really craft national policy.

In his new book, The Long Alliance, Gabriel Debenedetti goes deep behind the scenes of the seemingly happy relationship between the 44th president and former Vice President Biden… and sees it was toxic from day one.

Biden grated on Obama from the very first day they met each other—and the irritation has lasted to this day.

When Obama entered the U.S. Senate in 2005, Biden—who had been in the body for more than 30 years—welcomed him to the brotherhood, but he also did what he does best: fill the room with hot air.

Thanks to the book, we know Obama’s first impression of Biden: He thought Biden was “condescending.”

During Biden’s speeches on the Senate floor, Obama rolled his eyes as much as anyone. As Biden poured out an endless stream of disconnected words, Obama texted a staffer three words.

The rift between the two ambitious and upwardly mobile Democratic senators only grew wider as the 2008 election approached. Obama had been on everyone’s lips since his speech electrified delegates at the 2004 Democratic National Convention, which nominated the less thrilling former Sen. John Kerry. Biden had already sought the presidency once, 20 years earlier, but suspended his campaign amid scandals over plagiarizing his speeches and lying about his academic record.

Biden blew up any positive feelings between the two by indulging in racist-sounding rhetoric, a staple of his private discussions.

In January 2007—on the day Biden filed his paperwork to run against Obama in the Democratic presidential primaries—Biden said he understood the reason his entire party felt excitement running down its leg for the Illinois senator.

“I mean, you’ve got the first mainstream African-American who is articulate and bright and clean and a nice-looking guy. I mean, that’s a storybook, man,” Biden said, as others recorded him.

“I mean, you got the first mainstream African-American who is articulate and bright and clean and a nice-looking guy. I mean, that's a storybook, man.”
— @JoeBiden (to @nytimes's @jasondhorowitz for @observer speaking about @BarackObama in 2007) pic.twitter.com/9TUBBwh5KM

In the 2008 primaries, Biden finished as a distant fourth behind Obama, former Sen. Hillary Clinton and former Sen. John Edwards. Biden received no delegates, but Obama thought “Scranton Joe” might give him appeal in a swing state and with more traditional Democrats. So, he swallowed his pride—and disgust—and put Biden on the ticket.

But dispatches from inside the Oval Office showed that Obama regretted it instantly, and for every minute of the next eight years.

Things really came to a boiling point just before the 2012 election, when Biden blurted out in an interview that he supported gay marriage—a controversial view at the time.

Obama had done everything in his power to avoid taking a position on this issue.

As a candidate in Illinois in the 1990s, Obama said he supported gay marriage on a questionnaire—but when he started running for national office, he claimed he opposed gay marriage. As president, he walked the line of not openly saying he backed gay marriage—which continued to fail when voters weighed in at the polls—but hinting that he would come around… right after the election.

One of Obama’s aides let the cat out of the bag: “We can’t trust (Biden) to say his lines,” the aide said.

The book reveals that Biden was always a puppet who would have words stuffed into his mouth by whoever programmed the teleprompter.

By some accounts, Obama was so upset he thought about replacing Biden on the 2012 ticket with Hillary Clinton.

While Obama eventually tapped Biden for a second term as vice president, the former president was clearly growing tired.

Obama reportedly told those closest to him that a third Biden presidential campaign would be “tired” and “unthinkably painful” to watch… and he did everything he could to discourage it.

Biden floated the possibility of a third campaign for president, and Obama told him, “You don’t have to do this, Joe, you really don’t.”

Obama demanded meetings and briefings with the candidate, where he “communicated his frustration that Mr. Biden’s closest advisers are too old and out of touch with the current political climate — urging him to include more younger aides,” according to The New York Times.

Once Biden threw his hat in the ring, Obama ran his vice president down behind his back.

After seeing Biden’s performance over the last 18 months, no one would ever underestimate that ability again.