Report: ISIS has thousands of blank passports - The Horn News 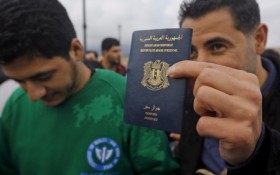 The Islamic terror group ISIS appears to have a new weapon in its arsenal – blank passports.

And if the terrorists are able to prepare the passports properly, it could make vetting refugees nearly impossible for authorities around the world.

According to the German newspaper The Welt am Sonntag, Western intelligence sources have said that ISIS may have acquired tens of thousands of official, blank travel documents in the areas of the Middle East under it’s control. That includes Syria, where refugees are vetted in camps before coming to America.

The passports could allow ISIS gunmen to blend in easily with the rest of the refugees, according to the German newspaper, allowing would-be terrorists to enter the European Union or United States disguised as asylum seekers.

Two of the Paris attackers in November were said to have used fake Syrian passports to enter mainland Europe.

Fabrice Leggeri, the chief of the European Union border control agency Frontex, told the media outlet AFP that right now no one can guarantee “that documents that look real were actually issued by an official authority.”