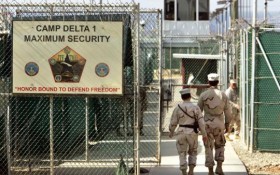 As President Barack Obama seeks political support for his administration’s plans to close the detention center in Guantanamo Bay, Cuba, he doesn’t seem to care that previously-released detainees have already killed Americans.

A senior Defense Department official told lawmakers Wednesday that U.S. citizens have been killed by prisoners released from Gitmo.

The admission triggered sharp criticism from Republicans opposed to shuttering the facility in the wake of deadly attacks by the Islamic State group in Brussels and Paris — but it hasn’t stopped the Obama administration from moving forward with their plan.

Paul Lewis, the Pentagon’s special envoy for Guantanamo detention closure, declined to provide the House Foreign Affairs Committee with details on the killing of the Americans.

“What I can tell you is unfortunately there have been Americans that have died because of (Guantanamo) detainees,” Lewis said during an exchange with Rep. Dana Rohrabacher, R-Calif.

“When anybody dies, it is tragedy and we don’t want anybody to die because we transfer detainees,” Lewis said.

Lewis testified before the committee along with Lee Wolosky, the State Department’s special envoy for Guantanamo closure.

Republicans and a few Democrats in Congress have repeatedly thwarted Obama’s effort to close the prison and blocked any attempt to move detainees to U.S. prisons in legislation the president has signed into law.

The Obama administration has released 144 detainees since 2008.

The committee’s hearing marked the first open exchange between the Obama administration and Congress over the utility and future of the prison since Obama sent his plan for shutting it down to Capitol Hill last month. The proposal was greeted with firm opposition from Republicans, who declared his proposal to deliver an unfulfilled campaign promise a non-starter.

Republicans see the prison at Guantanamo as more essential than ever. With the Islamic State group carrying out deadly assaults in Europe and expanding its base in Libya, they said, there needs to be a place to hold terrorist suspects. Republicans have refused Obama’s request that Congress change the law that prohibits moving detainees accused of violent extremist acts to U.S. soil.

The committee’s chairman, Rep. Ed Royce of California, and other GOP lawmakers have also criticized the Obama administration for moving detainees to countries that are probably unable to ensure they don’t resume the behaviors that got them locked up in the first place.

“Countries like Ghana and Uruguay aren’t typical security and intelligence partners, but they are being asked to shoulder a heavy burden and responsibility,” Royce said.

There are 91 men held at Guantanamo, down from nearly 250 when Obama assumed the presidency. Those left include 36 who are cleared for release if security conditions can be met in the countries where they will settle. Seven face trial by military commission, including five charged with planning and supporting the terrorist attack of Sept. 11, 2001. Three others have been convicted.

The Director of National Intelligence reported this month that 5 percent of Guantanamo prisoners released since January 2009, when the U.S. began using the multi-agency screening process, have re-engaged in terrorism and 8 percent are suspected of it. That compares to 21 percent confirmed and 14 percent suspected under the earlier system.