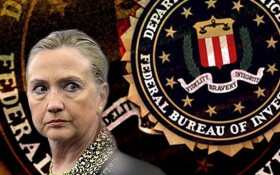 And now at least one longtime Washington insider is reporting that a recommended indictment could be coming soon.

Speaking on “The Steve Malzberg Show” Monday, former House Majority Leader Tom DeLay said his sources within the FBI claim the agency is closing in on Clinton.

“I have friends that are in the FBI, and they tell me they’re ready to indict,” DeLay said.

While the FBI can recommend an indictment, whether it leads to a prosecution, as DeLay pointed out, is a whole other matter.

It would ultimately be up to United States Attorney General Loretta Lynch to decide whether to prosecute Clinton. And Lynch is expected to come under significant pressure from the Obama Administration to look the other way on Clinton’s transgressions.

If that happens, DeLay said FBI agents may not go away quietly. DeLay claims they’re open to “going public” to make sure Clinton is held accountable and that her alleged crimes aren’t swept under the rug.

Questions over Clinton’s use of private email servers to handle classified information — and whether voters can trust her — couldn’t come at a worse time, with Iowa caucus voting just days away.

During a townhall meeting last night, Clinton was immediately put on the defensive by a young voter who said many of his peers view her as dishonest. She vigorously disputed that notion, blaming her perceived untrustworthiness on attacks from her political opponents.

“They throw all this stuff at me and I’m still standing,” Clinton said.

According to DeLay, that won’t be the case for long.