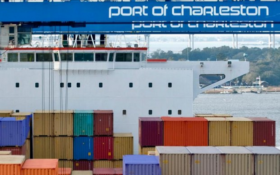 A “dirty bomb” — a low-tech but highly deadly explosive made with radioactive materials — sneaking into America through a cargo shipment at a U.S. port.

Thursday, FBI agents rushed to South Carolina to prevent that very thing from happening. At the Port of Charleston in South Carolina, employees at one terminal were evacuated by the U.S. Coast Guard while four shipping containers were examined by agents using radiation detectors after a threat was made.

According to authorities, after exhaustive sweeps no radioactive material was detected. One “person of interest” is in custody.

Sponsored: Plain and Simple, You Deserve This Money

There were no further details immediately available on the suspect.

Stump told WCIV-TV that port employees were evacuated Wednesday night and part of the Cooper River was closed.

The Coast Guard said in a news release that officials determined early Thursday there was no detected radiation in four containers on the Maersk Memphis ship, and they were allowed to be brought into the country.

Coast Guard officials say the terminal at the Port of Charleston in South Carolina has resumed normal operations.