Report: FBI closing in on Hillary - The Horn News 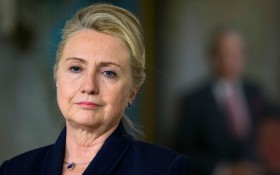 The FBI’s probe into former Secretary of State Hillary Clinton’s emails may have evolved recently from a preliminary fact-finding mission into a full-blown criminal investigation.

That’s according to former assistant director of the FBI Tom Fuentes, who recently told POLITICO, “When you have this amount of resources going into it …. I think it’s at the investigative level.”

Recent reports have suggested that FBI investigators have stepped up their inquiries into Clinton’s home-brew server and whether sensitive information may have been stored on or transmitted through it.

“This sounds to me like it’s more than a preliminary inquiry; it sounds like a full-blown investigation,” Fuentes said.

This could mean that the FBI is not just looking into whether classified information was sent out, but who is legally responsible.

On top of the FBI investigation, at least two Senate committees are still investigating Clinton’s email arrangement and seeking the release of correspondence from her top aides.

Roughly half of Clinton’s 30,000 work-related emails are now public, and the State Department’s effort to release the rest will linger into next year.

Clinton has faced questions about whether her unusual email setup, which involved a private server located at her New York home, was sufficient to ensure the security of government information and retention of records.