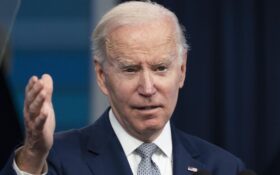 President Joe Biden’s chief of staff violated the law by retweeting a political message on his government Twitter account, and a warning letter was sent to him, according to a memo from the Office of Special Counsel.

The memo, dated Wednesday, said Ron Klain broke the law by violating the Hatch Act, which prohibits government officials from using their official roles to influence elections, including supporting candidates, while acting in their official capacities.

The message Klain retweeted on May 22 from STRIKE PAC, a Democratic group, was about delivering infant formula to Americans.

The message also included the encouragement, “Get your Democrats Deliver merch today!” — an illegal endorsement of a political party from an official government account. Klain removed the retweet when the complaint was filed.

Don’t break out the handcuffs quite yet, however. No disciplinary action will be pursued and the office, an independent government watchdog that monitors violations of the Hatch Act, considers the matter closed. Klain was warned to be more careful in the future.

“Although OSC has concluded that Mr. Klain violated the Hatch Act … we have decided not to pursue disciplinary action and instead issued him a warning letter,” Ana Galindo-Marrone, chief of the Hatch Act Unit at the U.S. Office of the Special Counsel, wrote in a statement.

Miller himself violated that same law while serving in the Trump administration, the Office of Special Counsel found in 2021.

The office investigated comments by Trump officials leading into the 2020 presidential election, including at the Republican National Convention, which was held at the White House in a major break from historical norms.

White House press secretary Karine Jean-Pierre often cites the Hatch Act in deflecting political questions during news briefings. Earlier this week she was asked whether Biden was doing everything he can possibly do to get Democrats across the finish line in the Nov. 8 elections.

“I have to be careful of what I say, because we do respect the Hatch Act here in this administration,” she said.