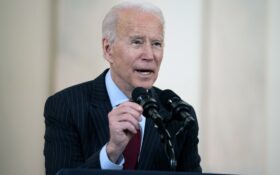 President Joe Biden is pushing his multi-trillion-dollar “infrastructure” plan — his reason being that the American people don’t pay their “fair share” of taxes.

But a new report shows the number one abuser of tax loopholes may be none other than Biden himself and his family.

Tax records show that for years, Biden sheltered millions of dollars away from the prying eyes — and clutching hands — of the IRS.

And to make matters more embarrassing, the taxes his family dodged would have helped pay for Obamacare and healthcare for senior citizens.

Those paydays let Joe and Jill lead the kind of lifestyle they’d always dreamed about: They now have three homes, including a five-bedroom beach house in Delaware and a $4.25 million home in one of the ritziest suburbs of Washington.

But the Bidens know half the secret of wealth is keeping it away from the tax collectors.

Joe Biden and his wife, Dr. Jill Biden, steered that $13 million in book royalties and speaking fees into a tax shelter… which basically let them avoid payroll taxes.

Instead of receiving the money directly, they had the money flow through two S-corporations, named the CelticCapri Corp. and Giacoppa Corp.

That move saved them 3.8 percent in payroll taxes — the taxes all Americans have withheld from every paycheck — which then fund Medicare and Obamacare.

All in all, the tax dodge, which isn’t available to average working Americans, saved the Bidens half a million dollars.

Instead of paying for the healthcare of 60 million elderly Americans, the taxes they socked away helped the Bidens fuel their jet-setting lifestyle.

Now, one of the leading Republicans in Congress is asking why the Bidens should get to avoid taxes while raising taxes on their fellow citizens. The chairman of the conservative Republican Study Committee — Rep. Jim Banks, R-Ind. — wrote a scathing letter calling out Biden for hiding his family’s wealth from taxes while trying to squeeze U.S. taxpayers.

“We write to highlight for the American people the hypocrisy you have exhibited in using a tax shelter strategy derided by the Left to avoid paying Obamacare taxes,” Congressman Banks wrote to Biden on March 25.

“During your presidential campaign, you repeatedly said, ‘Obamacare is personal to me.’ And your administration has sought to expand Obamacare wherever possible,” Banks wrote. “Yet, you and your wife avoided paying over $121,000 in Obamacare payroll taxes.”

Nothing Biden did is illegal… but it looks like one huge double standard coming from a president who says that wealthier Americans have a patriotic duty to pay high taxes.

“There’s no reason for” the Bidens’ earnings to go to an S-corporation — “none, other than to save on self-employment tax,” an accountant who reviewed the Bidens’ tax returns told the WSJ.

To make matters worse, one of Biden’s closest allies agrees.

Biden nominated Neera Tanden, who led the Soros-funded think tank Center for American Progress, to head the Office of Management and Budget. Tanden called funneling earnings through an S-corporation a “loophole,” plain and simple.

Biden saved on his own taxes, but now he wants to crank up taxes to pay for his $2 trillion “infrastructure” bill, a $2 trillion “American Rescue Plan,” and a future spending plan for childcare that comes in at nearly $3 trillion.

He’s so desperate to fund his big-spending, big government programs that he’s even talking about a “global minimum tax” on corporations.

Meanwhile, the high-living Biden clan exploits the tax loopholes that Joe wrote by shifting money back and forth between shell corporations.

“Do you intend to undo your hypocrisy and pay these taxes back to the American people?” Banks’ letter asked.

In Biden’s America, the little people are the ones who pay.