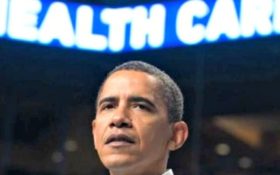 Trump’s early morning tweet praising “our wonderful new Healthcare Bill” started off the day, and GOP leaders planned a news conference to promote the plan ahead of Wednesday’s committee action.

The new bill aims to replace “Obamacare” with a system designed along conservative lines. Primarily affected would be some 20 million people who purchase their own private health plans directly from an insurer and the more than 70 million covered by Medicaid, the federal-state program for low-income people.

White House budget chief Mick Mulvaney said Tuesday it’s unfair to compare how many people would have health insurance under the new Republican plan to those under the existing health law that Republicans have long derided as “Obamacare.”

“What Obamacare did was make insurance affordable, but care impossible to actually afford,” Mulvaney said on NBC’s “Today Show.” ”The deductibles were simply too high. So people could say they have coverage but they couldn’t actually get the medical care they needed when they get sick.”

Mulvaney said that while the nonpartisan Congressional Budget Office hasn’t yet determined the cost of the new health care bill, it will bring “tremendous long-term savings” by giving states more control over Medicaid, the joint federal-state program for low income Americans.

The Republican legislation would limit future federal funding for Medicaid, which covers low-income people, about 1 in 5 Americans. And it would loosen rules that former President Barack Obama’s law imposed for health plans directly purchased by individuals, while also scaling back insurance subsidies.

Republicans say their solutions would make Medicaid more cost-efficient without punishing the poor and disabled, while spurring private insurers to offer attractive products for the estimated 20 million consumers in the market for individual policies.

Over the next few days, stakeholders will be dissecting the GOP proposal, which may become the second major shift on health care policy in less than a decade. Democratic and Republican governors, hospital executives, physician groups, insurers, drug makers and consumer groups will have their say.

House committees planned to begin voting on the legislation Wednesday, launching what could be the year’s defining battle in Congress and capping seven years of GOP vows to repeal the 2010 Affordable Care Act. It’s unclear if Republicans can manage to overcome divisions within their own party and deliver a final product.

The plan would repeal the unpopular fines on people who don’t carry health insurance. It would replace income-based subsidies the law provides to help millions of Americans pay premiums with age-based tax credits that may be skimpier for people with low incomes. Those payments would phase out for higher-earning people.

Senate Finance Committee Chairman Orrin Hatch, R-Utah, wouldn’t rule out changes by his chamber, where significant numbers of moderate Republicans have expressed concerns that the measure could leave too many voters without coverage.

Thirty-one states and the District of Columbia opted to expand Medicaid coverage under the Obama-era law to an estimated 11 million people. Around half those states have GOP governors, who are largely reluctant to see that spending curtailed.

A series of tax increases used to finance the Obama overhaul’s coverage expansion would be repealed as of 2018.

In a last-minute change to satisfy conservative lawmakers, business and unions, Republicans dropped a plan pushed by Ryan to impose a first-ever tax on the most generous employer-provided health plans. Instead, a similar tax imposed by Obama’s law on expensive plans set to take effect in 2020 would now begin in 2025.

Popular consumer protections in the Obama law would be retained, such as insurance safeguards for people with pre-existing medical problems, and parents’ ability to keep young adult children on their insurance until age 26.

To prod healthier people to buy policies, insurers would boost premiums by 30 percent for consumers who let insurance lapse.