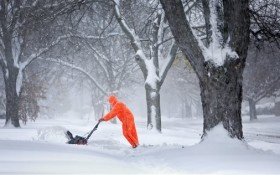 A deep freeze set in across the Midwest on Sunday with low temperatures forecast in the single digits and a few below zero, turning the season’s first major snow into ice that made some roads treacherous to travel.

Temperatures plunged behind a cold front that brought snow across much of the region Friday and Saturday. The National Weather Service forecast 20 degrees or lower across six states from North Dakota to Illinois.

The weather service reported temperatures in the single- and low double-digits Sunday in northern Illinois, including Chicago, where residents were digging out of more than 11 inches of snow — the highest November total in 120 years in the city.

More than 130 flights were cancelled Sunday into and out of the O’Hare International Airport in Chicago, according to flight-tracking website FlightAware.com.

In Minneapolis, dozens of people huddled around fires to stay warm at an encampment outside a police station to protest the fatal shooting of a black man by officers there last week. Temperatures hit a low of 17 degrees overnight, and light snow was expected to move in by Sunday evening.

The first snowfall of the season also brought amounts ranging from a few inches to 20 inches of snow from South Dakota through Michigan earlier in the weekend.

In the southern Wisconsin town of Janesville, between 10 and 20 inches of snow had fallen by late Saturday afternoon, according to the National Weather Service.

Southside True Value Hardware manager Matt Krienke said business had been good in the days leading up to the storm in the Janesville, but that it had become “very, very, very, very slick.”

Slick driving conditions were reported across the region. In western Michigan, two people were injured in a 15-car pileup late Saturday along Interstate 196 following heavy snow in the area. Local police said one woman was struck by a vehicle after getting out of her vehicle.