Real-life Lassie saves the day in Massachusetts - The Horn News 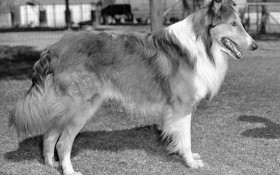 It was a scene straight out of an episode of “Lassie.”

Police in Orange, Massachusetts say a dog approached an officer on Tuesday barking frantically and then led the officer across a field and down an icy, 30-foot embankment, where the dog’s canine companion had become entangled in the undergrowth.

Firefighters in Orange used a ladder to free the trapped dog, which was taken to a veterinarian for a checkup.

The two dogs had run off hours earlier when their owner suffered a medical emergency at her home and was taken to the hospital. Police tried to catch the dogs, but they kept running away.

Orange police said on their Facebook page: “Apparently, any dog in the right circumstances can turn into Lassie.”