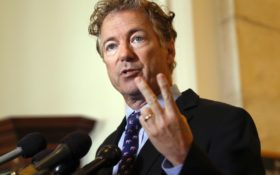 U.S. Sen. Rand Paul’s longtime neighbor pleaded not guilty Thursday to charges that he assaulted the Kentucky Republican while he was mowing his lawn.

Rene Boucher only spoke to reply “yes sir” to a judge during a brief arraignment. He showed no emotion and kept his head down. Boucher faces up to a year in jail if convicted of fourth-degree assault.

Paul, who was not at the hearing, wrote on Twitter on Wednesday that he suffered six broken ribs and has excess fluid around his lungs. The injuries have sidelined Paul from the Senate as he recovers at his home.

A prosecutor said after court that criminal charges may change because of the severity of the lawmaker’s injuries.

Warren County prosecutor Amy Milliken didn’t provide any more details but said her office was working with Kentucky State Police and the FBI. She said the investigation “has not concluded.”

Milliken declined to discuss what could have caused the attack.

Boucher’s lawyer Matt Baker said the possibility of a federal charge “is a concern.”

“I hope that that doesn’t happen,” Baker said. “And the research that I have done thus far would indicate that there’s no applicability of the federal statute that appears to address the issue.”

He said that he’s still investigating the cause of the attack.

“It has nothing to do with politics,” Baker said. “It has zero to do with Democrat or Republican, liberal or conservative, anything along those lines. It has to do with a disagreement between two neighbors.”

A staffer with Paul’s office disputed media reports that the two men had a “longstanding dispute.”

“The Pauls have had no conversations with him in many years,” senior advisor Doug Stafford said. “The first ‘conversation’ with the attacker came after Sen. Paul’s ribs were broken. This was not a fight, it was a blind side, violent attack by a disturbed person.”

Warren County District Judge Brent Potter set a pre-trial court date for Nov. 30. Boucher has been ordered to stay away from Paul and the senator’s family.

Paul and Boucher have been neighbors for 17 years in a gated community.

Rob Porter, a close friend of the lawmaker, said this week that Paul doesn’t know why he was attacked. Paul was mowing his yard and had stopped to remove a limb when Boucher tackled him from behind, Porter said. Paul was wearing ear protection and didn’t hear Boucher coming, the friend said.