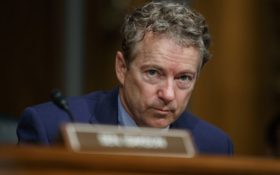 Sen. Rand Paul, R-K.Y., is doubling-down on his calls for the media to name the Ukraine whistleblower — and he told Fox News that if the media won’t do its job, he will.

Paul appeared on Fox News’ “Special Report with Bret Baier” on Tuesday and called on the mainstream media to name the whistleblower… or else Paul said he would do it himself.

“I say to the media: Do your job and print his name,” Paul said at a Kentucky political rally on Monday.

On Tuesday, he doubled-down.

“The statute says the inspector general can’t reveal the name,” Paul said. “There’s nothing that prevents me from saying it now. Other than that, I want it to be more about the process and less about the person.”

“But there is no law that prevents me from mentioning the name of who’s been said to be the whistleblower,” he said.

That report remains unconfirmed by Republican lawmakers and the Inspector General’s office.

Paul says it is important to name the whistleblower because he is a potential witness in the investigation of former Vice President Joe Biden’s alleged misconduct.

“He was there under Joe Biden. He was there when Joe Biden was trying to fire the prosecutor … that was investigating Hunter Biden,” Paul said. “So this person was a Ukrainian expert on the desk at that time.”

“I think he should be interviewed not as the whistleblower, but as a material witness to the Biden corruption in Ukraine,” Paul explained.

In the past, Paul has been an outspoken advocate for the protection of whistleblowers like former CIA operative Edward Snowden. He said naming whistleblowers, and protecting them, are two different things.

“I want Edward Snowden protected,” Paul explained. “So he’s not executed. I want him protected.”

“What about this guy?” Baier responded.

“I don’t want him executed either,” Paul responded. “And I don’t think he should be fired.”