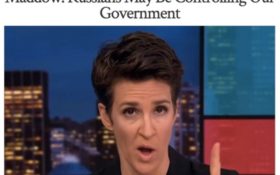 MSNBC’s Rachel Maddow is in very big trouble — and if recent news from her rival cable news network CNN is any indication, it could mean layoffs are just months away.

Maddow has spent two years telling viewers that President Donald Trump was under control of the Russian government.

After special counsel Robert Mueller’s report on Russian election meddling showed zero evidence that Trump colluded with Russia — the opposite of what Maddow and the liberal media were promising — her ratings took a nosedive.

And it’s been a long time since it’s been this bad.

Last week, Maddow’s primetime show brought in the worst ratings it has received in a year.

“Her show last week averaged 2,324,000 viewers, with an average audience of 337,000 in the 25-54 age demographic, both of which mark yearly lows for the liberal television host,” The Daily Caller reported.

Her previous low was the last week in March, right after Attorney General William Barr announced that the Russia-Trump conspriacy theory was debunked.

Maddow’s ratings nosedive is similar to the crash CNN has seen — and it’s cost the liberal network dearly.

After watching their primetime rating numbers collapse, CNN executives start a round of layoffs in early May.

According to a report by Fox News on May 6, nearly 10 percent of CNN’s entire staff are at risk of being let go this month. CNN has refused to call the move a “mass layoff” but instead called it a “voluntary buyout option for employees.”

With MSNBC’s ratings also circling the toilet, seemingly getting worse by the week, surely they can’t be far behind.

That’s very bad news for Maddow and her collegues.