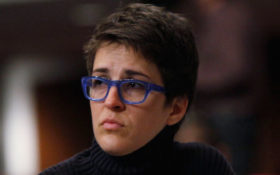 MSNBC star Rachael Maddow has gone off the deep end. Tuesday, she nearly wept after talking about one of President Donald Trump’s tweets while on national television.

In other words, the liberal media believes an having all-time high stock market, with rock-bottom unemployment (especially among minorities and the poor), and safe borders is part of a secret plot to take down America?

Talk about suffering from Trump Derangement Syndrome! If bringing dignity to American workers and security to our borders is what the media believes a hostile foreign agent in charge of America would do… no wonder they loved former President Barack Obama!

Tuesday night, Maddow couldn’t take it anymore. With an ominous backdrop over the title “The Next Target” Maddow talked about disgraced Justice Department official Bruce Ohr and his closed-door interview with the House Judiciary and Oversight Committee this week. Just days earlier, Trump had tweeted that Ohr was part of the disease that had discredited the Justice Department.

“Department of Justice will not be improperly influenced by political considerations.” Jeff, this is GREAT, what everyone wants, so look into all of the corruption on the “other side” including deleted Emails, Comey lies & leaks, Mueller conflicts, McCabe, Strzok, Page, Ohr……

….FISA abuse, Christopher Steele & his phony and corrupt Dossier, the Clinton Foundation, illegal surveillance of Trump Campaign, Russian collusion by Dems – and so much more. Open up the papers & documents without redaction? Come on Jeff, you can do it, the country is waiting!

Tuesday, the House Judiciary Committee questioned Ohr about his relationship with British spy Christopher Steele and the debunked Trump dossier. Ohr had recently been demoted for hiding his financial conflicts of interest and political connections while working in the Department of Justice, and nearly everyday more comes out regarding his involvement with Hillary Clinton’s presidential campaign.

“Republicans literally came back from summer vacation early to spend the day trying to destroy Bruce Ohr,” Maddow told viewers, saying that the Republican investigation into the Deep State was a secret Russian plot to undermine American justice.

“When they went after Peter Strzok, they were going after the top counter intelligence official at the FBI with experience in breaking up Russian intelligence operations on U.S. soil. In going after Bruce Ohr today, they are trying to take out one of American law enforcement’s top experts on Russian organized crime!”

Of course, Maddow failed to mention Ohr or Strzok’s inappropriate behavior that saw them both demoted over their anti-Trump behavior. Instead, she choked back tears and predicted the end of the United States justice system.

“I don’t know exactly what these targeted attacks by the White House and congressional Republicans will ultimately do to the capabilities of the Justice Department and the FBI when it comes to fighting things like Russian intelligence operations in the United States, and Russian organized crime, and Russian money laundering through American real estate,” Maddow said, choking back tears.

“But you can imagine how satisfying a day like today must have been for a guy like Semion Mogilevich [a Russian mobster] to see Bruce Ohr get his turn in the barrel like this, right? You can imagine how delightful that was for the Russian Mafia,” a somber Maddow said.

“You can imagine what a nice turn of events today must have been when viewed from the perspective of the Kremlin.”

You can watch the segment here.