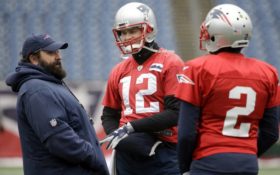 The Patriots say quarterback Tom Brady did not attend a scheduled AFC championship news conference Wednesday because he was meeting with the team medical staff for a right hand injury.

According to New England’s first injury report of the week, Brady was a limited participant in the practice held earlier in the day.

It was the Patriots’ first practice in preparation for Sunday’s conference title game against Jacksonville. Defensive lineman Alan Branch and running backs Mike Gillislee and Rex Burkhead also were limited by knee injuries.

Brady appeared on the Patriots’ weekly injury report several times during the latter half of the regular season with both an Achilles tendon and left shoulder injury.

The 40-year-old has never missed a playoff start during his 18-year career.