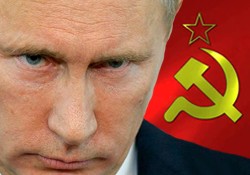 Russian President Vladimir Putin may have his eyes set on a new world order — and it looks like President Obama and the United Nations don’t have the stomach to stop him.

Military experts say Putin has dusted off an old Soviet roadmap that now allows Russian forces to infiltrate and destabilize any country on earth.

And in Syria right now, Putin is proving the concept for the second time.

Adm. Vladimir Komoyedov, head of the Russian’s parliament’s defense committee, has just admitted that Russian “volunteers” are likely flooding into Syria to help prop up the regime of embattled leader President Bashar al-Assad.

It’s the exact same strategy Russia deployed just last year to destabilize a Ukrainian government that had aspirations of becoming part of the European Union.

In the Ukraine, Russian soldiers who were supposedly retired or no longer active duty streamed across the border to support pro-Russian forces.

There was ample evidence that Russia was arming — and even secretly directing — the troops. But by dismissing the forces as volunteers and not official Russian military, Putin was able to distance himself from direct responsibility for the fighting.

It’s a strategy that Putin seems ready to use to further his territorial ambitions and exert influence in former Soviet republics and other countries around the world. The kind of influence Russia hasn’t had since the collapse of the Soviet Union nearly 25 years ago.

But it’s not an idea he invented. Sending unsanctioned military forces into countries to destabilize current leadership or install puppet regimes was a major part of the Soviet Union’s global strategy for much of the 20th century, particularly in Africa, Asia and Central America.

Former KGB agent Putin knows the playbook well. And as he prepares to send a new wave of “volunteers” into the Middle East, he may be feeling particularly emboldened.