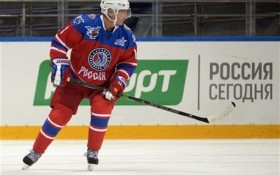 Russian President Vladimir Putin spent his 63rd birthday on the ice Wednesday, playing hockey with a team of NHL stars… against a team of non-pros made up of Russian officials and tycoons. And had it broadcast on national television.

Putin was allowed to score seven goals as his star-studded team, which included NHL legends Vyacheslav Fetisov and Pavel Bure, won the game 15-10. The opposing team included Defense Minister Sergei Shoigu as well as Putin’s close friends — tycoons Gennady Timchenko and Arkady Rotenberg. Both were hit with Western sanctions last year for their ties to Putin in the wake of Russia’s annexation of Crimea.

Putin was given a trophy for his team’s win at the end of the game and a medal for his contribution to hockey in Russia.

Earlier in the afternoon, Putin was briefed by Shoigu about the Russian air force operation in Syria. As the Russian television began to broadcast dramatic footages of Russian cruise missiles fired from a warship in the Caspian Sea, lighting up the night sky, Putin stepped on the ice of the Shayba arena in Sochi for the game that was broadcast live on Russian television.

In Grozny, the capital of Chechnya, officials were hosting a soccer game featuring Italian veterans to celebrate Putin’s birthday. The organizers unfurled a banner covering the entire football pitch that read: