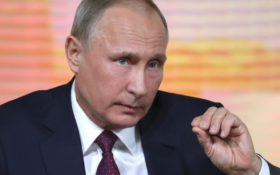 Russian President Vladimir Putin on Thursday scoffed at allegations of collusion between U.S. President Donald Trump’s campaign and Russia, saying they have been “invented” by Trump’s foes and have hurt the U.S. political system.

He also mocked his critic, Alexei Navalny, who is barred from challenging Putin in the March 18 vote by an embezzlement conviction, saying those like him want to plunge Russia into a destabilized quagmire. He vowed not to let that happen.

Speaking at his annual marathon news conference, Putin reaffirmed his firm denial of meddling in the 2016 U.S. presidential election.

“All of it was invented by people who oppose President Trump to undermine his legitimacy,” he said. “I’m puzzled by that. People who do it are inflicting damage to the domestic political situation, incapacitating the president and showing a lack of respect to voters who cast their ballots for him.”

He argued that Russian Ambassador Sergei Kislyak, whose contacts with Trump’s entourage are part of the FBI and Congressional probes into ties between the Trump campaign and Russia, was simply performing his routine duties.

Putin also insisted Russia’s state-funded RT TV and Sputnik news agency had a very minor presence in the U.S. media market, adding that the U.S. demand for them to register as foreign agents represented an attack on media freedom. Russia has responded in return, requesting the U.S. government-funded Voice of America and the Radio Free Europe/Radio Liberty to register as foreign agents.

The Russian leader said he and Trump had spoken on a first-name basis on the sidelines of two international summits this year and voiced hope that Trump eventually would be able to fulfill his campaign promises to improve ties with Russia.

Putin emphasized that the two countries need to cooperate on tackling global challenges. He said Russia, in particular, is ready for “constructive” cooperation on tackling the North Korean standoff.

Putin has warned the U.S. not to use force against North Korea, adding that the consequences will be “catastrophic.” He emphasized that Russia opposes Pyongyang’s nuclear bid, but added the U.S. had “provoked” Pyongyang into developing its nuclear and missile programs by spiking a 2005 deal under which North Korea agreed to halt them.

Putin said Moscow was encouraged to hear U.S. Secretary of State Rex Tillerson’s statement about readiness for talks with Pyongyang, hailing it as a “realistic” approach.

The Russian leader also voiced concern about the U.S. considering a pullout from key nuclear arms control pacts, adding that Moscow intends to stick to them.

He noted that Russia is particularly worried about what he described as U.S. violations of the INF Treaty, a Cold-War era pact banning intermediate range missiles. The U.S. has accused Russia of pact violations — charges that Russia has denied. Putin said the U.S. accusations are part of a “propaganda” campaign to pave the way for the U.S. withdrawal.

He emphasized that Russia will “ensure its security without entering an arms race.” Russia’s military spending next year will amount to 2.8 trillion rubles (about $46 billion) compared to the Pentagon’s budget of about $700 billion, he noted.

Putin, who declared his re-election bid last week, said he would run as a self-nominated candidate, keeping a distance from the main Kremlin-controlled party, United Russia, whose many members have been dogged by corruption accusations.

He said he would welcome political competition but insisted that the opposition should offer a positive program.

Answering a question from 36-year-old celebrity TV host Ksenia Sobchak, who is challenging him in the March 18 presidential election, Putin said Thursday that he doesn’t fear political competition but emphasized that the government would protect the country from attempts by radicals to destabilize Russia.

Without mentioning Navalny’s name, Putin likened him to former Georgian president turned Ukrainian opposition leader, Mikhail Saakashvili, who has challenged the Ukrainian government with a series of anti-corruption protests.

Putin said his government wouldn’t let “people like Saakashvili” plunge Russia into instability like that which is now wracking Ukraine.

Asked about accusations of state-supported doping that led to Russia being banned from the 2018 Winter Olympics in South Korea, Putin alleged that there is a political element behind the claims, which Russia has denied.

Putin says Russian doping expert Grigory Rodchenkov — who is under witness protection after fleeing to the United States last year — is “under the control” of the FBI and “American special services.”

He suggested U.S. agencies may be giving Rodchenkov unspecified “substances so that he says what’s required.”

Putin said the fact that Rodchenkov was appointed to run Moscow’s anti-doping laboratory “was a mistake on the part of those who did it, and I know who did it,” but didn’t name names or say they should be punished.

Rodchenkov’s testimony played a key role in International Olympic Committee investigations that led last week to Russian athletes being required to compete under a neutral flag at the 2018 Winter Olympics in Pyeongchang.