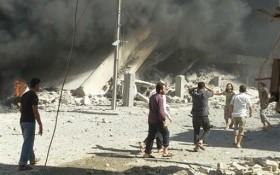 President Barack Obama’s weak foreign policy is allowing Russia to target and kill troops trained and supported by the United States. And there doesn’t seem to be any concern that the Obama Administration is going to do anything about it.

According to the Associated Press, Russian jets carried out a second day of strikes in Syria Thursday, with targets including a rebel group trained and armed by the United States.

Russian Defense Ministry Igor Konashenkov said in televised comments that Russian aircraft damaged or destroyed 12 targets in Syria. Officials acknowledged that unidentified groups were being targeted as well as ISIS.

Putin’s spokesman Dmitry Peskov told reporters on Thursday that Russia was going after a “list” of other groups.

Asked Thursday whether Putin was satisfied with the way the Russian campaign was going, Peskov said it was “too early” to say.

With American and allied airstrikes daily, and now Russian warplanes in the Syrian airspace, the war is taking on a dangerous new dimension.

Russian officials reportedly warned the Americans “via confidential channels” of where they planned to strike, but the Americans did nothing.

The ministry’s spokeswoman, Marzieh Afkham, said the “Islamic Republic of Iran considers military action by Russia… a step toward fighting terrorism and toward resolving the current crisis” in Syria.