Putin orders US military out of Syria - The Horn News 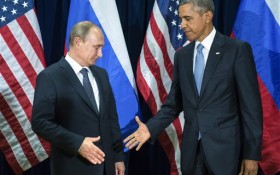 Ahead of Russian airstrikes, Vladimir Putin has allegedly ordered American planes to leave Syria territory Wednesday. The Russian leader told the US military to stand down as Russia starts their military operation, according to a senior U.S. official.

Early Wednesday morning US defense officials, who are under President Barack Obama’s command, said that American forces would not interfere.

Following this, the Associated Press confirmed that Russia had begun airstrikes in the country in support of US enemy, Syrian President Bashar Assad

Putin had to request parliamentary approval for any use of Russian troops abroad, according to the constitution. The last time he did so was before Russia annexed Ukraine’s Crimean Peninsula in March 2014.

The vote comes after Putin’s meeting Monday with President Barack Obama on the sidelines of the United Nations General Assembly meeting in New York, where the two discussed Russia’s recent military buildup in Syria.

Putin and other officials have said Russia was providing weapons and training to Assad’s army to help it maintain control in the country. Russian navy transport vessels have been shuttling back and forth for weeks to ferry troops, weapons and supplies to an air base near the Syrian coastal city of Latakia. IHS Jane’s, a leading defense research group, said last week that satellite images of the base showed 28 jets, including Su-30 multirole fighters, Su-25 ground attack jets, Su-24 bombers and possibly Ka-52 helicopter gunships.

The Federation Council, the upper chamber of the Russian parliament, discussed Putin’s request for the authorization behind closed doors Wednesday, cutting off its live web broadcast to hold a debate notable for its quickness.

Sergei Ivanov, chief of Putin’s administration, said in televised remarks after the discussion that the parliament voted unanimously to give the green light to Putin’s request. The proposal does not need to go to the lower chamber.

Moscow has always been a top ally of Assad. The war in Syria against his regime, which began in 2011, has left at least 250,000 dead and forced millions to flee the country. It is also the driving force behind the record-breaking number of asylum-seekers fleeing to Europe this year.

Washington agreed to talk to Moscow on how to “deconflict” their military actions. Last week, Obama’s Defense Secretary Ash Carter had a 50-minute phone call with his Russian counterpart, in the first such military-to-military discussion between the two countries in more than a year.

“We as a great power cannot but take part in fighting this great evil,” Matvienko said, adding that the Soviet Union and Syria signed a security cooperation agreement in 1980 that guarantees that Moscow would help Damascus if asked. ”