Putin: Ambassador killer not a lone wolf - The Horn News 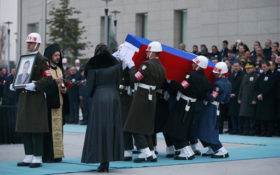 The spokesman for President Vladimir Putin on Wednesday indicated that Moscow doesn’t believe the gunman who killed Russia’s ambassador to Turkey acted on his own, but refused to explain the reasons for the suspicion.

“We shouldn’t rush with any theories before the investigators establish who were behind the assassination of our ambassador,” said spokesman Dmitry Peskov, who offered no suggestions about who those people might be.

The ambassador, Andrei Karlov, was killed Monday evening in front of stunned onlookers at a photo exhibition in Ankara. The assassin, Mevlut Mert Altintas of Ankara’s riot police squad, was killed in a police operation.

On Tuesday, Russia flew a team of 18 investigators and foreign ministry officials to Turkey to take part in the probe. Their plane returned with Karlov’s body and his family. Russian officials and Turkish Foreign Minister Mevlut Cavusoglu who was visiting Moscow met the family at the Vnukovo airport late on Tuesday.

Ankara has not made public any theories. But a senior Turkish government official, who spoke Tuesday on condition of anonymity because he was not authorized to release details to the press, said it was unlikely Altintas acted alone.

The official said the killing had all the marks of being “fully professional, not a one-man action.”

Independent Turkish security analyst Abdullah Agar said Altintas’ behavior and the manner in which he carried out the attack “gives the impression that he received training that was much more than riot police training.”

Agar said the words the gunman uttered in Arabic were from a passage frequently cited by Jihadists.

Altintas shouted: “Don’t forget Aleppo! Don’t forget Syria!” in Turkish during the attack, and also yelled “Allahu akbar,” the Arabic phrase for “God is great.” He continued in Arabic: “We are the descendants of those who supported the Prophet Muhammad, for jihad.”

Turkey has been rife with speculation about Altintas’ motive and possible links.

On Tuesday evening, a Turkish Foreign Ministry official said Cavusoglu spoke with U.S. Secretary of State John Kerry by phone and provided information on the assailant.

The official, speaking on condition of anonymity in line with government rules, said Cavusoglu also told Kerry that both Turkey and Russia “know” that a movement led by U.S.-based Muslim cleric Fethullah Gulen was behind the attack.

Turkey has accused Gulen of orchestrating a failed military coup in July aimed at toppling President Recep Tayyip Erdogan and accuses the cleric of wanting to destabilize Turkey. It is pressing the United States to extradite Gulen to Turkey to stand trial for his alleged role in the coup attempt. Gulen has denied the accusations.

During the phone call, Kerry raised concerns about “some of the rhetoric coming out of Turkey with respect to American involvement or support, tacit or otherwise, for this unspeakable assassination yesterday because of the presence of Mr. Gulen here in the United States,” Kerry’s spokesman John Kirby said.

Much of Turkey’s media, both broadcast and print, has reported claims that the gunman had links to the Gulen movement, including reports of Gulen literature being found in his home, and of him having studied at a Gulen-run school.