Pulitzer-winner: This secret Obama manuscript will SHOCK the world - The Horn News 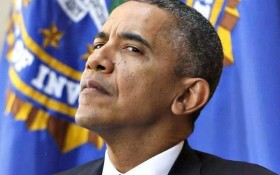 Pulitzer-prize winning historian David Garrow has spent years digging up everything he could find on former President Barack Obama — and the author says that what he’s found will shock America to it’s core.

Next month, Garrow is releasing his tell-all book he promises will reshape everything you think you know about Obama.

Garrow’s research is extensive, and what he uncovered is not pretty.

Titled “Rising Star: The Making of Barack Obama”, the book reportedly includes a previously undiscovered manuscript Obama allegedly co-authored while in law school in the 1990s. According to Garrow, it contains revealing insight on Obama’s opinion of race and American history.

“Had some Republican opposition researcher come up with” the manuscript Obama wrote in law school during the 2008 election, Garrow said in an appearance on “The Jamie Weinstein Show” podcast, “there are multiple things that could have been used to [defeat] him.”

“What most disappointed me back in the context of 2008 was how little interest U.S. journalists of all stripes took in the eight years that Obama spent in Springfield, Illinois, inside the state legislature. There is not even — as we sit here today — one good magazine article out there about Obama’s time in the Illinois state legislature,” Garrow said.

Of particular interest, Garrow said, is the hundreds of pages Obama co-authored with his close law school friend. The secret manuscript was part of a book proposal that was never published, and includes approximately 140 pages that would have changed American history if they’d been found before November 2008.

The pages “give significant insight into Barack’s thinking, you know, when he was leaving law school, about to enter into public life in Illinois,” Garrow said.

The former president isn’t happy about what’s about to happen, either.

According to the author, he met informally with Obama to discuss the content… and Obama “very strongly” disagrees with the book.

“What I would fairly say, and we see this again very much in the present day, is that when one becomes president of the United States, it’s not uncommon for that person to think that their memory, their version of events, inescapably trumps all other people’s versions,” Garrow said.