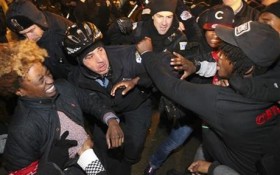 The white officer who shot a black Chicago teen 16 times has been charged with murder and jailed.

The graphic video of the slaying was made public yesterday, and in the hours after the footage was released, protesters swarmed into the streets of Chicago.

Some protesters threw water bottles at police during confrontations overnight. But with many Chicago citizens off work for the next several days due to the Thanksgiving holiday, officials are worried that the number of protesters could swell significantly.

City officials and community leaders had long braced for the release of the dash-cam video showing the death of 17-year-old Laquan McDonald. They fear the kind of turmoil that occurred in cities such as Baltimore and Ferguson, Missouri, after young black men were slain by police or died in police custody.

A judge ordered that the recording be made public by Wednesday.

Protest groups are expected to stage more demonstrations in the days ahead, including one at City Hall scheduled for Wednesday and another seeking to block Michigan Avenue during Black Friday’s holiday shopping bonanza.

The relevant portion of the video runs for less than 40 seconds and has no audio.

McDonald swings into view on a four-lane street where police vehicles are stopped in the middle of the roadway. As he jogs down an empty lane, he appears to pull up his pants and then slows to a brisk walk, veering away from two officers who are emerging from a vehicle and drawing their guns.

Almost immediately, one of the officers appears to fire from close range. McDonald spins around and collapses on the pavement.

The car with the camera continues to roll forward until the officers are out of the frame. Then McDonald can be seen lying on the ground, moving occasionally. At least two small puffs of smoke are seen coming off his body as the officer continues firing.

In the final moments, an officer kicks something out of McDonald’s hands.

Police have said the teen had a knife. Cook County State’s Attorney Anita Alvarez said Tuesday that a 3-inch knife with its blade folded into the handle was recovered from the scene.

Shortly after the video’s release Tuesday, protesters began marching through city streets. Several hundred people blocked traffic on the near West Side. Some circled police cars in an intersection and chanted “16 shots.”

Demonstrators, at times numbering in the hundreds, streamed through streets in the downtown and near South Side areas, gathering at one point outside the police department’s District 1 headquarters.

Later, along Michigan Avenue, at least one person was detained, which led to a tense moment as protesters tried to prevent police from taking him away. Some threw plastic water bottles at officers and sat behind a police vehicle, refusing to move. Officers pulled them away, and the vehicle sped off.

Months after McDonald’s death, the city agreed to a $5 million settlement with his family, even before relatives filed a lawsuit, a move that also drew deep skepticism from the community.

At the time of McDonald’s death, police were responding to complaints about someone breaking into cars and stealing radios.

Van Dyke, who was denied bond on Tuesday, was the only officer of the several who were on the scene to open fire.

At Tuesday’s hearing, Assistant State’s Attorney Bill Delaney said the shooting lasted 14 or 15 seconds and that McDonald was on the ground for 13 of those seconds.

An autopsy report showed that McDonald was shot at least twice in his back and PCP, a hallucinogenic drug, was found in his system.

Van Dyke’s attorney, Dan Herbert, maintains his client feared for his life and acted lawfully and that the video does not tell the whole story.

After the shooting, Van Dyke was stripped of his police powers and assigned to desk duty.

The graphic video can be seen below. McDonald first appears at 5:10 into the video.