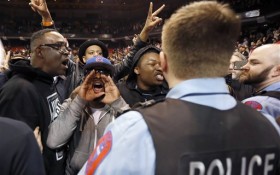 They’ve tried everything from blocking traffic to violence to stop Donald Trump rallies and hurt his campaign.

But now, radical left-wing protesters have unveiled a new strategy — they’re hauling Trump to court claiming his supporters are harassing them.

Three protesters — one of whom is affiliated with the Black Lives Matter movement — filed a suit against Trump on Apr. 1st, alleging they were assaulted at a Trump rally in Louisville, Kentucky last month, accusing the presidential front runner of inciting a riot by saying “get ’em out.”

The demonstrators also named three Trump supporters as defendants, alleging they assaulted them when they were forcibly removed from the Kentucky International Convention Center.

But, again, it appears clear that protesters are causing more trouble at Trump rallies than they’re receiving in return. One of the plaintiffs in the lawsuit has called Trump supporters everything from white supremacists to neo-Nazis, and doesn’t appear to be a model for peaceful protest or civil political debate.

And recently, BLM protesters were seen at a Trump protest stomping and spitting on an American flag in front of veterans in an attempt to antagonize the GOP frontrunner’s supporters. You can see video of their shameful actions below (warning: foul language):