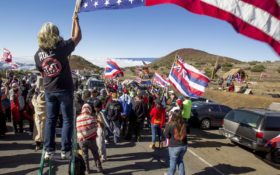 Developers rebuilding a storied, hurricane-ravaged Hawaii hotel with a Hollywood connection were looking forward to the Coco Palms’ rebirth when two men showed up last year, claiming to own the property because they descend from King Kaumualii, the last ruler of Kauai.

The men set up camp in tents and at the old tennis pro shop at the shuttered resort, where Elvis Presley’s character got married in the 1961 film “Blue Hawaii.” Hurricane Iniki forced its closure in 1992.

“They simply just showed up and started squatting,” said Chad Waters, one of the partners of Coco Palms Hui, the company leading the redevelopment.

Police were called, trespassing citations were written, and a judge last month issued an order to evict them.

Since then, a stream of protesters has come and gone, with some days just a few demonstrators and others dozens camped out at the resort near an ancient Hawaiian fishpond in the community of Wailua.

It’s the latest example of Native Hawaiian activists taking a stand on cultural issues and sacred places, such as challenging a giant telescope planned for a Hawaiian mountain and blocking the U.S. military from using an uninhabited Hawaiian island as a live-fire testing site.

The protest also comes amid continued activism by indigenous groups across the U.S., who have rallied over issues ranging from sports mascots to environmental causes such as the Dakota Access and Keystone XL oil pipelines.

Attempts by The Associated Press to reach the two men in the Coco Palms case — Noa Mau-Espirito and Charles Hepa — by phone and online for comment were unsuccessful. However, Mau-Espirito last year told The Garden Island newspaper: “We have title to the land. We’re not camping. Our goal is to get all the families who have royal patents in Wailua back on their land.”

The judge disagreed with the men, ruling their claims don’t give them the right to occupy the property.

For Kaukaohu Wahilani, who flew from his home on Oahu to Kauai to support Mau-Espirito and others, it’s about standing up to the wrongs committed against Hawaiians — all the way back to the overthrow of the Hawaiian kingdom 125 years ago.

He and other Native Hawaiians want the area called by its traditional name, Wailuanuiahoano.

At least 50 protesters gathered at the site, bracing for law enforcement action, as the judge’s 6 p.m., Jan. 28, deadline to leave the property approached. But no police showed up, and the protesters remained.

“I was kind of hoping (police) would have showed up at 6 because we had a lot of people there,” said Wahilani, a Native Hawaiian activist who considers himself a subject of the Hawaiian kingdom.

Five to 10 people have been at the property this week, Waters said.

He and his partner requested help from state sheriffs.

Toni Schwartz, spokeswoman for the state Department of Public Safety, said only that the sheriffs are working toward a resolution with the property owner, Kauai police and the protesters. “For safety and security reasons, we are not at this time, free to discuss any strategies that may be utilized in any related enforcement action,” Schwartz said in a statement.

Demolition began in 2016, with the goal of reopening in mid-2018. The clash has caused delays, so the developers hope start construction soon after the protesters leave, Waters said.

The renovated hotel will have 350 rooms, including 22 master suites and about 50 junior suites. Hyatt will manage the hotel once it’s reopened.

Wailua was the political center of Kauai long before the resort opened in 1953 and Presley’s character crooned the “Hawaiian Wedding Song” while holding his bride’s hand and boarding a raft to cross a lagoon.

It’s where chiefs were born and lived, said Lilia Merrin, a teaching assistant at the University of Hawaii’s Kamakakuokalani Center for Hawaiian Studies. Because of its high amount of surface water, it was ideal for loi, irrigated fields for farming the starchy vegetable taro, a staple crop, she said.

Growing up in Wailua, Merrin knew of Coco Palms mostly as the hotel where family friends worked in service jobs before the hurricane. She learned about its Hawaiian significance in college. “If we understand these places, we can better protect them,” she said.

Coco Palms Hui has planned since 2014 to set aside land at the resort for a community nonprofit that will offer lessons in Hawaiian culture, including hula, lei making, Hawaiian language and ukulele.

The nonprofit also will provide hotel workers with a guide about Hawaiian culture and the historic Wailua area. The fishponds and lagoons are on the state historic registry and will be preserved.

Tyler Greene, the other partner of Coco Palms Hui, has said the resort will help the island by supporting “healthy and vibrant activity for both the residents and visitors,” according to The Garden Island.

The Coco Palms fight was inspired by what passionate protesters accomplished against the Thirty Meter Telescope, which they said would desecrate sacred Mauna Kea, Wahilani said.

Construction stopped in 2015 after 31 demonstrators were arrested on the mountain for blocking the work. A second attempt to restart construction ended with more arrests and crews retreating.

The project is now tied up in legal battles.

“Mauna Kea brought us together, and since then we’ve done amazing things,” Wahilani said.