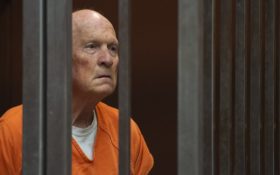 Prosecutors added another murder charge Monday against a California serial killing suspect, boosting the number of victims to 13 in the Golden State Killer case.

Former police officer Joseph DeAngelo, 72, was charged with first-degree murder in the 1975 killing of community college teacher Claude Snelling, who was shot while stopping the kidnapping of his 16-year-old daughter in Visalia, Tulare County District Attorney Tim Ward said.

Police say they have physical evidence linking DeAngelo to the killing of Snelling but didn’t elaborate.

“We have taken that first step in providing justice not only for the victim’s family but for this community as a whole,” Ward said.

DeAngelo was previously charged in 12 killings throughout the state in the 1970s and 1980s that authorities say were committed by one of the state’s most elusive serial killers.

Detectives are also confident that DeAngelo is a burglar known as the Visalia Ransacker, who struck more than 100 homes in the 1970s, terrorizing the farming community about 40 miles (64 kilometers) south of Fresno, Visalia police Chief Jason Salazar said.

DeAngelo worked as a police officer in the nearby town of Exeter from 1973 to 1976.

Snelling’s daughter, Elizabeth Hupp, said Monday she was in her bedroom when she awoke to see a masked gunman in 1975. The man threatened her before dragging her out of the house.

“That’s when I heard my dad yell and . the man with a ski mask pushed me to the ground, turned and shot my dad twice as he was coming through the back door,” Hupp told CBS News.

Even though she didn’t see his face, Hupp said she believes DeAngelo killed her father.

“In my heart, I believe he’s the one, and that my father was his first victim,” she said.

DeAngelo is also suspected of committing roughly 50 rapes but he can’t be tried on those crimes or the burglaries because the statute of limitations has expired.

Investigators linked DeAngelo to some of the killings by plugging DNA collected from a semen sample at one of the crime scenes into a genealogical website that they say showed a match to a distant relative of DeAngelo.

Authorities say they later collected DNA from a tissue left in trash outside DeAngelo’s house to make the final match.

There is no DNA evidence in the killing of Snelling. After DeAngelo was arrested earlier this year, investigators said they were eyeing fingerprints and shoe tracks left by the Visalia Ransacker for a possible link to DeAngelo. They previously determined the gun used to kill Snelling was taken during one the thefts.

Shortly after Snelling was killed, DeAngelo moved and joined the Auburn Police Department outside Sacramento. He was fired from that police department in 1979 after he was caught shoplifting a hammer and dog repellent, authorities said.

Authorities finally arrested DeAngelo in April at his Citrus Heights home and said they believed he was the killer who had long proved elusive to authorities.