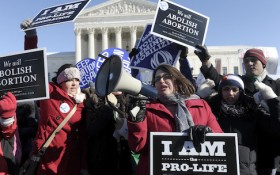 A proposed Alabama constitutional amendment would legally define a fetus as a person from the moment of fertilization, effectively banning abortion in the state.

The House Health Committee on Wednesday debated but did not vote on the amendment.

The bill, sponsored by Rep. Ed Henry, R-Decatur, is similar to ballot measures voted down in Mississippi, Colorado and North Dakota in recent years. The Oklahoma Supreme Court in 2012 ruled a similar amendment unconstitutional.

“To me, science makes it clear that it (life) begins at fertilization,” Henry said.

Brock Boone, an American Civil Liberties Union lawyer, called the bill an “attack on women.” Boone said the amendment would ban abortion in cases of rape and incest, and could render some forms of birth control the “legal equivalent of homicide.”

Dr. Jim Belyeu, an OB/GYN who spoke in support of the bill, called a fetus “totally separate” from the mother.

“The mother only contributes the egg and the incubator,” Belyeu said.

Two Democrats on the committee, Rep. John Knight and Rep. Peblin Warren, said they hoped supporters would show equal concern for other programs that help children.

If the House and the Senate approve the bill, Alabamians would vote on the amendment in November.