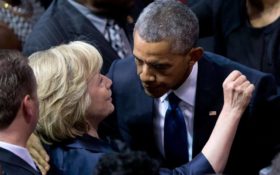 A breakthrough new revelation shows that the Obama administration was such a black hole of justice that two separate investigations into former Secretary of State Hillary Clinton’s crimes were nearly shut down by the same Deep State official – and they happened right after a possible bribe.

According to a crack investigative reporter, one of the highest-ranking figures in the Obama administration shut down the investigation into Hillary’s homebrew e-mail server – the same time his wife got a big, fat campaign donation from a Clinton insider.

Andrew McCabe, who was the FBI Deputy Director for Barack Obama, told agents to back off the investigation into crooked Hillary’s e-mails, something his agents are calling a “stand down” order.

Multiple former FBI agents told investigative reporter Sara A. McCarter that evidence of criminality was piling up, but McCabe ordered them to butt out.

As Secretary of State, Hillary’s use of an unsecured e-mail server put national security in peril. She denied sending classified material over her personal system, but investigators retrieved undeniable proof that she did repeatedly – making them easy prey for foreign spies and private hackers.

The story went public after it was published, surprisingly enough, by the New York Times.

FBI agents say McCabe gave the stand-down order sometime between when the story hit in March 2015 and that July.

That means that McCabe tried to squash the politically embarrassing investigation into crooked Hillary’s server before it even began.

The eyebrow-raising decision came as McCabe’s wife Jill was running for Virginia state senate as a Democrat – and as her campaign got a huge donation from a Clinton ally.

The Wall Street Journal found election records showing that she received $700,000 from super PACs associated with Terry McAuliffe, the then-Virginia governor who has a cozy, decades-long relationship with the Clinton family.

McAuliffe is not just a friend – he’s a political ally. He ran the Democratic National Committee under former President Bill Clinton, who tapped his most valuable connections to put McAuliffe in the governor’s mansion in Richmond.

At the very least, the whole sordid episode gives the appearance that McAuliffe was acting as Hillary’s fixer, shoveling in campaign donations to the investigator’s wife to make the whole problem go away.

And it worked! The donation and McCabe’s order came about almost simultaneously, FBI sources reveal.

If a top-ranking member of the Obama administration tried to thwart a criminal investigation, that spells trouble for him – the kind that comes with an orange jumpsuit.

“McCabe tried to steer people off the private e-mail investigation, and that appears to be obstruction and should be investigated,” one former FBI official told McCarter. “Now if the information on the ‘stand-down’ order is obtained by the IG (inspector general) that could bring a whole lot of other troubles to McCabe.”

That’s even worse news for McCabe, who’s already facing a possible criminal investigation that he lied – to his own investigators in the FBI – about leaking information about the investigation into the Clinton Foundation in 2016.

McCabe is said to have given a stand-down order in the Clinton Foundation investigation, too. The DOJ’s inspector general recommended his role be investigated and, if there’s enough evidence, prosecuted.

President Donald Trump has had a field day, tweeting, “James Comey just threw Andrew McCabe ‘under the bus.’ Inspector General’s Report on McCabe is a disaster for both of them! Getting a little (lot) of their own medicine?”

James Comey just threw Andrew McCabe “under the bus.” Inspector General’s Report on McCabe is a disaster for both of them! Getting a little (lot) of their own medicine?

It also comes after new texts have been recovered between FBI agents Peter Strzok and Lisa Page, who planned the Russian collusion nonsense as an “insurance policy” in case Trump got elected.

The entire Deep State effort to destroy Trump is falling apart and soon, the conspirators may be in prison.

This whole affair shows how dirty the Obama administration – which brags about being “scandal-free” – really was…but there’s more to it than that, much more.

The entire Deep State has to be ripped out, root-and-branch, or it will continue to thwart democracy, abuse power, and silence the voice of the American people for decades to come.