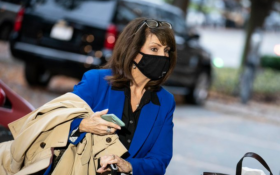 Chicago has amassed a long, well-documented history of public corruption, and one congressmember has just written the latest chapter.

Rep. Marie Newman, D-Ill., represents the Chicago suburbs and some portion of the city. She may have gotten there by bribing her political rival to stay out of the race, according to a watchdog complaint under review by the House Ethics Committee.

“Rep. Newman, during a successful campaign for election to the U.S. House of Representatives, may have promised federal employment to a primary opponent for the purpose of procuring political support,” the Office of Congressional Ethics (OCE) wrote in a report.

“If Rep. Newman used her candidacy to promise federal employment, she may have violated federal law, House rules, or standards of conduct.”

According to the allegations, Newman may have bribed history professor Iymen Chehade: an activist for Palestinian causes and a potential challenger in the Democratic primary.

In one email, Hadade specified his own ambitions to run for office after Newman.

“I would like to put that in the contract along with a commitment to endorse me once you decide to leave.”

In other words, Hadade may have agreed to postpone his political career in exchange for a job as Newman’s chief foreign policy advisor.

OCE also pointed to two different witnesses, including Newman herself. The witnesses agreed that Hadade worked relatively little on Newman’s campaign and yet received full-time employment after her election.

One witness, Newman’s campaign manager, claimed to have never worked with Hadade before the inauguration.

The campaign manager was asked, “Did it strike you as odd that the congresswoman entered into an employment contract so far ahead of the election?”

“Yeah,” the manager responded. “It was odd.”

Newman claimed to have been working with Hadade in an unofficial capacity. She also claimed that Hadade requested a position, without her offer.

“He simply offered to do — to build my Palestinian-Israeli statement and that’s all he did,” Newman said.

“I just want to be clear on the word ‘offer.’ So Iymen had pitched the role to me several times over a period of months. We talked all the time because we were friends, right? After May he offered to help me ‘take out’ [the incumbent]. And he said, let me help you. We talked a lot. And he — from time to time he would pitch the idea of me being his — or him being my foreign policy advisor.”

The OCE mentioned another witness, but it redacted this witness’s report.

In October, the OCE referred its report to the House Ethics Committee. By the new year, the committee had voted 6-0 to review the allegations against Newman.

However, the committee has yet to confirm the allegations. It said in a press release, ‘The Committee notes that the mere fact of conducting further review of a referral, and any mandatory disclosure of such further review, does not itself indicate that any violation has occurred, or reflect any judgment on behalf of the Committee.”

In a statement, Newman asked the committee to dismiss the investigation. She accused the committee of misinterpreting the contract and withholding evidence, including text messages from Hadade.

She also argued that she doesn’t need to follow the bribery law. According to Newman’s statement, the relevant bribery rule only applies to political candidates, and she had not yet filed with the Federal Elections Commission at the time.

The House Ethics Committee will be the judge of that.

Newman first ran for Congress in 2018 against incumbent Rep. Dan Lipinski, D-Ill. She lost narrowly, and she then she challenged Lipinski again in 2020.

She seemed to be leading a sea change, but perhaps she’s crested.