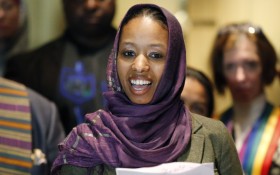 A Christian college near Chicago and a political science professor who wore a headscarf to show solidarity with Muslims have agreed to part ways.

Wheaton College says in a statement on its website Saturday that the college and Dr. Larycia (lah-REE’-shuh) Hawkins “have reached a confidential agreement under which they will part ways.”

Hawkins, who’s Christian, was placed on leave in December when she posted on Facebook that Christians and Muslims worship the same God. College officials said at the time that her views were inconsistent with their “doctrinal convictions.”

The college— about 30 miles from Chicago — said then that it would begin proceedings to dismiss her but the faculty protested. Hawkins says in the statement released Saturday that she had great respect for Wheaton college.