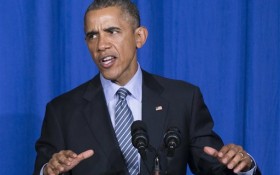 Six years ago, the Obama administration set the ambitious goal of ending veteran homelessness in 2015 and ending the backlog in disability claims.

Now it appears likely the Department of Veterans Affairs will miss both targets.

The latest count available showed about 50,000 homeless veterans on a single night in January 2014. Results from the January 2015 count are expected later this month.

The disability and pension claims backlog is on a downward path, but not before the claims processing system became so overwhelmed that lawmakers and veterans groups demanded changes at the VA.

Yet, as one crisis began to fade at the VA, another blossomed.

Reports of thousands of veterans waiting months and sometimes years for VA health care have taken priority and colored the way all other issues are viewed. Democratic presidential front-runner Hillary Clinton faced significant criticism recently when she tried to downplay the wait times that veterans have been complaining about for years.

The VA has been focused on getting homeless veterans into housing immediately and paying for it with a voucher that subsidizes most or all of the rent. The VA then works to provide the veterans with counseling, health care and other benefits.

VA Secretary Robert McDonald said last week that the end of the year was still the goal for ending veteran homelessness. McDonald said his focus is now on Los Angeles with an estimated 4,200 homeless veterans.