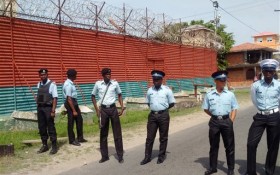 At least 16 prisoners died in a fire Thursday as they protested overcrowding and other issues inside a prison in the capital of the South American country of Guyana, authorities said.

Inmates set two fires during a riot in the most secure section of Georgetown Prison as guards swept the lockup and seized drugs, cell phones and other items, said Public Security Minister Khemraj Ramjattan.

“We have a crisis on our hands,” he said. “Long delays in trials have caused much frustration and vexation among prisoners.”

The first fire was set late Wednesday using mattresses and was extinguished with no injuries reported. The second fire was set Thursday around noon and led to the fatalities, officials said.

Ambulances were seen entering the facility’s main gate, and authorities said at least eight prisoners were hospitalized for burns and smoke inhalation. Officials were seen carrying at least one prisoner by the feet and shoulders with burns on most of his body.

Hundreds of people lined up at the prison gates to take food to inmates and seek information about relatives inside.

The colonial-era prison holds nearly 1,000 prisoners even though it was built to hold about 450 inmates. Previous fires have been set at the prison in recent years to protest conditions, but none had caused fatalities.

Ramjattan said a prison in Guyana’s interior will be prepared to ease overcrowding of prisons in Georgetown. It is unclear how soon inmates would be transferred.

He said a three-person committee will be created to investigate the fatal fire.