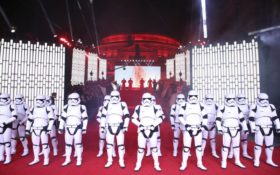 “Star Wars” fans and royal-watchers gathered Tuesday at London’s Royal Albert Hall, where Prince William and Prince Harry were due on the red carpet for the European premiere of “Star Wars: The Last Jedi.”

The royal siblings may even make a cameo appearance in the much-anticipated film.

Royal officials have refused to comment on reports that the princes recorded a scene playing Stormtroopers in the sci-fi saga when they visited the film’s set in April 2016. At the time they were filmed meeting crew members, battling with light sabers and hugging a Wookie.

Star John Boyega has said the royal duo filmed a scene during their visit to London’s Pinewood Studios, though it’s unclear whether it made the final cut.

On the red carpet, director Rian Johnson would not comment on the reported royal cameo.

“I can neither confirm nor deny it,” he said.

London-born star Boyega was joined on the red carpet by fellow cast members including Daisy Ridley, Adam Driver, Andy Serkis, Benicio del Toro, Anthony Daniels — who has played C-3PO in the “Star Wars” series since 1977 — and Mark Hamill, who returns as Luke Skywalker.

Hours before the screening, hundreds of fans lined up on one of the coldest days of the year for a glimpse of the stars, the royals and a phalanx of Stormtroopers who marched in formation up the red carpet.

“You never get used to this kind of passion and enthusiasm,” Hamill said. “It’s just wonderful. The fans have been so supportive over the years. Their enthusiasm is infectious.”

The screening is a benefit for the princes’ charity, the Royal Foundation.

The eighth film in the “Star Wars” series, “The Last Jedi” had its world premiere Sunday in Los Angeles. The adventure is a follow-up to “The Force Awakens,” which brought the franchise back to movie screens in 2015.

It is the last film to feature Carrie Fisher as Princess Leia. Fisher died in December 2016, shortly after completing her final scenes.