I quit! Kamala Harris office in shambles; resignations flood in - The Horn News 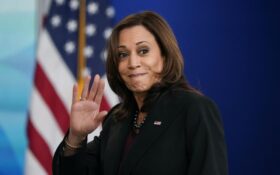 Political strategist Symone D. Sanders has worked as senior advisor and chief spokesperson for Vice President Kamala Harris since the inauguration in January.

Now, Sanders is just the latest top aide to quit Harris’ office. Sanders has become the third staffer to quit in the last 30 days amid reports of chaos and dysfunction within the Harris camp.

Just hours earlier, Harris’ director of press operations, Peter Velz, announced his resignation in the “coming weeks.” At the beginning of this month, Harris’ communication director, Ashley Etienne, said she was resigning at the end of the year.

Sanders herself confirmed her intent to resign.

“Every day, I arrived to the White House complex knowing our work made a tangible difference for Americans,” Sanders wrote in an office note obtained by Politico. “I am immensely grateful and will miss working for her and with all of you.”

Sanders first submitted her resignation letter several months ago, according to Chief of Staff Tina Flournoy.

“Symone told the VP a couple months ago that she’d be leaving us at the end of the year,” Flournoy wrote in another note obtained by Politico.

Sanders gained a reputation as “one of the most publicly recognizable individuals in the Biden administration,” according to Politico. She accompanied Harris on all her ill-fated trips abroad, to Guatemala and then to France and southeast Asia.

“I’ve often said about her that no job is too big or too small for Symone,” Flournoy wrote.

Harris’ office has earned some negative press due to disorder and infighting, but Sanders has pushed back against the media narrative.

Sanders told reporters last month, “It is unfortunate that after a productive trip to France in which we reaffirmed our relationship with America’s oldest ally and demonstrated U.S. leadership on the world stage, and following passage of a historic, bipartisan infrastructure bill that will create jobs and strengthen our communities, some in the media are focused on gossip.”

In Asia, Sanders contributed to a panic by uttering too many details about “Havana syndrome.” Speaking with reporters, Sanders gushed about Harris’ good health, even though no reporter had asked.

In fact, Sanders herself has contributed to some infighting.

At a 2019 fundraiser, Biden reminisced about promoting “some civility” with Sen. James Eastland and Sen. Herman Talmadge, two segregationist Democrats. Harris famously attacked Biden for his “hurtful” comment at a Democratic debate that year.

Meanwhile, Sanders tweeted, “Biden did not praise a segregationist. That is a disingenuous take.”

.@JoeBiden did not praise a segregationist. That is a disingenuous take. He basically said sometimes in Congress, one has to work with terrible or down right racist folks to get things done. And then went on to say when you can't work with them, work around them.

Sanders’ coworkers spoke to CNN on Thursday and defended the resignation. They attributed Sanders’ departure to the need for “a break,” not to office infighting. One colleague even said of Sanders, “She’ll always be a member of the Biden-Harris family.”

Still, Sanders seemed like an unlikely choice for the Harris, even from the beginning.

It remains unclear who will replace her, but she’s made her future ambitions known. Sanders wrote in her memoir last year, “One day I want to be White House press secretary.”