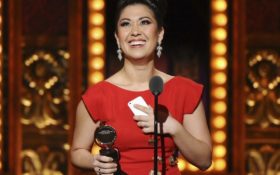 A Tony-winning Broadway actress who was pregnant when a car killed her 4-year-old daughter has lost the baby.

An attorney for Ruthie Ann Miles and her husband says they are suffering pain that is “nearly impossible to fathom.”

Miles’ daughter, Abigail, and a friend’s 1-year-old son were killed as they crossed a Brooklyn street on March 5. Miles was severely injured.

The driver was arrested on manslaughter charges.

According to the Daily News , attorney Ben Rubinowitz says the baby, who had been due this month, was named Sophia Rosemary Wong Blumenstein.

He says Miles and her husband, Jonathan Blumenstein, are grateful for the support of family and friends but request privacy.